Doris Jean was born on July 6, 1925, to Margaret and C. B. (Ben) Thomason, on a farm in Alfalfa County near Burlington. Ben homesteaded there in the Land Run of 1893, and throughout life Doris was grateful for her pioneer heritage and was proudly a member of Oklahoma’s First Families of the Twin Territories.  Her appreciation for growing up in a rural community was why paying it forward became a guiding principle in her life.

She met fellow contestant Robert L Armbruster, from nearby Driftwood Schools, at a county speech contest.  Following her graduation from Burlington High School, they were married on Christmas Eve, 1943.  They farmed and ranched in the Burlington area for more than 56 years before Bob’s passing in 2000.

Her greatest earthly treasure was family.  She was selflessly devoted to Bob and her children, and in later years her grandchildren and great grandchildren were beacons of joy.  Her memory was almost encyclopedic with details about extended family, even distant cousins.  She was purposeful in supporting other youth, recognized by honorary memberships in local, county and state 4-H and FFA organizations.

A devout Christian, Doris served Burlington Christian Church (Disciples of Christ) in about every lay capacity possible – Sunday School teacher, youth leader, board member and elder.  She was active in Oklahoma Disciples Women, recognized for her faithful stewardship by being honored as a Sister of the Servanthood.  True to her roots, she was instrumental in founding an endowment with the Oklahoma Disciples Foundation, in the name of the Burlington Church, to support seminary students preparing for rural ministries.

Regarding the family’s livelihood in agriculture, her first love was the beef cattle business.  In the mid-1970’s, Doris became a member of the Cowbells, now the Oklahoma CattleWomen.  In 1993, she became Chairwoman of the Oklahoma Beef Cookoff, an event dedicated to promoting the industry.  During her 15-year tenure in that position, she earned the admiration of Cattlewomen friends for her quiet and steady leadership, and for her organizational talent.  Her leadership roles extended beyond the Cookoff, to becoming President of OCW and to serving as an officer and on committees with the American National CattleWomen.

Recognition of her life-long contributions to agriculture culminated in 2018 when she was named among Significant Women in Oklahoma Agriculture by the State Department of Agriculture, Food and Forestry.

Doris intensely advocated for the Democrat Party, primarily through her substantial involvement in the Alfalfa County Democrats.  She shared a kinship with other Democratic women, because they held common values and priorities.

Doris decided to leave the farm in 2016, moving to Golden Oaks Retirement Village in Enid, where she made many new friends and continued living to the fullest.  There she enjoyed belonging to the CWF of her new home congregation, Central Christian Church.  She passed on August 25, 2020, not long after celebrating her 95th birthday.

She is remembered for her devotion to God and country, for her unconditional and generous love for all family, for her ease in making friends and loyalty to them, for her grace and modesty, for her insistence on treating everyone fairly, for her unwavering dedication to beliefs held dear, and for her actions to preserve and foster the way of life she cherished.

Doris was preceded in death by her parents, her husband, Robert; brother, Benton Thomason, and sisters, Marcella Schupbach, Thelma Cross and Vera Collins.

Funeral service was at 10 a.m., Saturday, August 29, 2020 at Central Christian Church in Enid with burial at Keith Cemetery at 1 p.m.  Visitation was from 1-7 p.m., Friday, August 28, 2020 with family present from 5-7 pm.  Arrangements are by Lanman Funeral Home, Inc. of Cherokee.  www.lanmanmemorials.com  Facebook:  Lanman Funeral Home Inc.

Memorials may be made to Keith Cemetery, Oklahoma Disciples Foundation or Burlington Education Foundation through the funeral home. 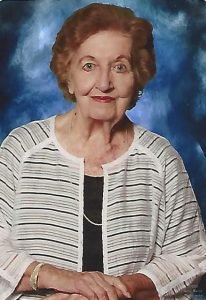