Walt was born December 18, 1943 in Vinita, the son of Alvin Newton Summers and Clara Marie Lay Summers.  They lived in Jet and moved to Cherokee his senior year.  He graduated from Cherokee High School with the Class of 1962.  Walt continued his education four more years at Oklahoma State University and University of Central Oklahoma.  He was a sergeant in the Oklahoma National Guard.

In 1978, he married Ellen Lee Willeford from Edmond.  Walt owned and operated a trucking company.  Together, they raised their two children, Jesse and Jamie, in Stillwater.

Walt went home to be with the Lord the afternoon of August 22nd, at his home in Stillwater.  He had a recent history of heart problems, which led to his passing.

He was preceded in death by his parents, Bud and Marie Summers, and his eldest brother, James Summers.

In lieu of flowers, memorials may be made in his name to Lost and Found International, Inc., in care of Dighton Marler Funeral Home, 5106 North Washington, Stillwater, OK  74075. 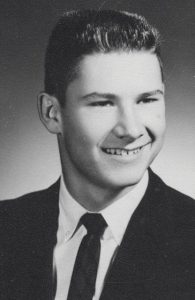