Jack was born on September 30, 1926 to Otis and Mae Elizabeth Bernard. Jack attended a one room schoolhouse and graduated from Cherokee High School in 1943.

At the age of 17, Jack joined the Navy. During World War II, he served on supply ships as a gunnery. After the war, Jack attended Oklahoma State University and graduated with a degree in Agriculture Engineering.

In 1946, Jack married his high school sweetheart, Nada. Together, they had five children: Gary, Kenneth, Randy, Janet and Linda.

Jack started his professional career as a mechanic while serving in the Navy Reserves. Later, he worked for Snap-on Tools as an Industrial Representative in Wichita, Kan. and eventually became a Branch Manager after moving to Overland Park, Kan.

Upon retirement, Jack and Nada travelled to most of the 48 states and returned home to Cherokee. In Cherokee, Jack worked his black Angus cattle, started and ran the Bernard Seed Company, all while Jack and Nada still enjoyed traveling and attending Professional Bull Riding Championships.

Jack will be greatly missed by all who knew and loved him.

The family would like to remind everyone to please wear a mask and practice physical distancing. 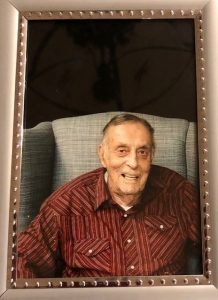