Mayble Watson was born in Pauls Valley on October 21, 1965 to parents William Albert Watson and Daisy Ellen Norton Watson and passed from this life in Tulsa on December 24, 2020.

After Pauls Valley, she lived in Driftwood, Cherokee, Helena, then Taft. While living at Taft, Mayble attended Langston University and received her Bachelor’s Degree. While in college she belonged to Sigma Gamma Rho Sorority, Inc.

Then she lived in Chicago where she taught in an elementary school for one semester. In 1987 she moved to Helena again and this was her permanent home. Mayble was a hard worker and her job descriptions were varied. First, she worked at Enid State School. Second, she was at JCCC Correctional Center in Helena from which she retired. Next, she worked with the Alfalfa County Ambulance Service and lastly, she was 911 Dispatch Operator for Alfalfa County. It should be noted that she was working toward a Master’s Degree in Counseling.

Mayble loved to travel and she loved life. She and her mother, Daisy, had traveled many places and in Oklahoma on Highway 66 from east to west always taking pictures and posting them to Facebook.

She was a member of Helena First Christian Church and called herself “A Minister and Servant of Christ at earth”.

She is preceded in death by her father, William Watson and her grandparents.

Those left to cherish her memory are her mother, Daisy Watson; one sister, Imogene Gage and husband, Noble; one nephew, Ray Gage and one niece, Kim Simonsen. 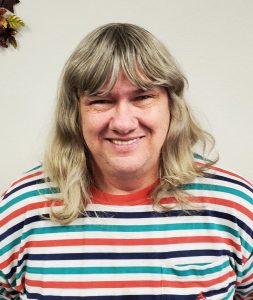