Delbert A. Sanders was born on Dec. 17, 1937 at home north of Goltry to Ardith and Susie Sanders and passed away suddenly on Dec. 20 at Integris Hospital in Enid.

He attended school at Goltry and graduated in 1956.

On June 25, 1958 he married Marian Acree. The couple made their home for over 62 years on a ranch near Goltry. They had a dairy and delivery route. Delbert was a cowboy, horse trainer and rancher. He participated in many ropings for many years. He was a hard worker and enjoyed taking care of his cattle daily.

He is survived by his wife, Marian, of the home; his daughter, Roxann Mason and husband Steve, Drummond; his son, Rowdy Sanders and wife Valerie, Enid; seven grandchildren and 17 great-grandchildren; and sister, Loretta Ramsey, Bartlesville.

He was preceded in death by his parents.

A celebration of life will be at a later date. Cremation arrangements are by Anderson-Burris Funeral Home and Crematory, Enid.

Memorial may be made through Anderson-Burris to St. Jude Children’s Hospital. 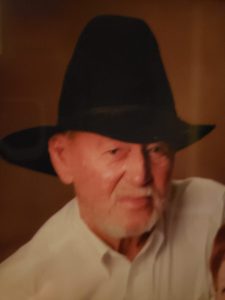