On May 19, 1928, Felice Warburton was born on the Cherokee farm her grandfather staked as a claim in the Cherokee Strip Land Run of 1893.

It was the largest such land run in U.S. history. Her parents, Cecil Clyde Warburton and Hazel Green Warburton raised their only child quietly and conservatively.

Without playmates on the farm, she cut out paper dolls from newspapers and magazines, planting seeds for her lifelong admiration for fashion.

While still in high school, she studied voice with Professor Hobart at Phillips University in Enid. She continued her vocal education at Oklahoma Baptist University.

One weekend while visiting her parents, Felice attended a dance and met Ed Calhoon, a medical student at the University of Oklahoma School of Medicine. Following their engagement in 1949, she sewed her wedding dress in her dorm room. That August, they married.

While Dr. Calhoon finished his surgical training.  Felice taught at Star Elementary School in Oklahoma City until their son, Scott, was born in 1950. Daughter, Lane, followed in 1955 after they settled in his hometown of Beaver.  Felice shared her husband’s love of ranching, of politics, and of nature and wildlife.

A founding member of Chapter GA of PEO, she was also an active participant in Friday Club, Garden Club, and Ladies Music Club. A long-time director of the United Methodist Church adult and children’s choirs, Felice sang solos at countless weddings, funerals, and other events over many years.

In 1970, unexpectedly, the “world of travel” opened when Dr. Calhoon became President of the Oklahoma State Medical Association. In 1972, the American Medical Association sent the Calhoons to England to study socialized medicine.

Back home and politically active, hers was the last bipartisan appointment in 1976 by then-Governor David Hall to a 7-year term on the Oklahoma State Personnel Board.

After her daughter began working in Washington, DC, Felice visited many times. She was President of the board that built Beaver County’s Jones and Plummer Trail Museum, which she designed.

More recently, she donated Dr. Calhoon’s large collection of antique and western saddles, as well as artifacts from both sides of the family.

Felice was well known as a brilliant pie and biscuit baker, an avid reader, devotee of talk radio, and fan of late-night TV. She followed health and finance news, and was devoted to her three grandsons.

A talented artist, she was proficient and prolific in oil painting, china painting and watercolors.  For years she drove 90 miles weekly to art classes in Liberal, Kan.

A gracious Southern lady guided by core Christian values, she was never given to big talk or harsh words. She proved herself to be stronger than most people realized after her husband died because she managed land and cattle so skillfully.  Friends said she was better at it than her late husband; her operation survived ice, drought, wildfire, untimely snow, and hail.

Truly, she leaves behind a well-managed legacy.  Felice’s lovely, gentle spirit and smiling manner will be sorely missed and long cherished by her family, friends, church, and community.

Funeral Services are 2 p.m., Saturday, April 24, 2021 in the Beaver United Methodist Church. Interment will be in the Beaver Pioneer Cemetery.

Memorials may be sent to the Jones and Plummer Trail Museum of Beaver or First United Methodist Church of Beaver. 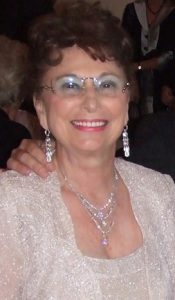