June passed away on April 17, 2021, at Bear Creek Senior Living Facility. She was an amazing woman with a zest for life and was a true people person. She led a life dedicated to all the children whose lives she touched as an educator. She was especially devoted to her five grandchildren and eleven great-grandchildren. She extended Southern hospitality to all she met.

June enjoyed a variety of activities including bridge, eating out, traveling, history and sports. She attended countless sporting events for her children, grandchildren and great- grandchildren. She loved following the Broncos.

June was born June 2, 1925, in oil field camp housing of Standard Oil Company in Drumright. She was the only child of Charles and Hazel (Campbell) Jett. June spent most of her childhood in Tyler, Texas, and graduated from high school in 1942. She attended the University of Texas in Austin and graduated in 1946 with a BA in Bacteriology. She was then employed by Baylor Medical Center of Houston. June worked in this field for three years during which time she did research and contributed to a published research paper.

In 1949 June married William George in Jet. Bill suffered trauma in World War II that left him unable to care for his family and they were divorced in 1953. June, her two children and her parents moved to Colorado Springs in August of 1954. With the support of her parents, June raised two children as a single, working mother. In 1964 June met Franklin “Chief” “Chub” Maytubby. He was her companion for the next 40 years. He was an integral part of June’s whole family.

Upon arriving in Colorado Springs, June enrolled in Colorado College and obtained her teaching certificate. She was hired by School District #11 and started her teaching career on February 14, 1955, at Whittier Elementary. She remained there for 13 years and made many lifelong friends.

She went on to become the district’s elementary math supervisor as well as principal at Mark Twain and John Adams Elementary schools. She retired from District #11 in 1992 after 37 years of dedicated service.

In 1960 June received an MA in Education from Colorado College. In the summer of 1963, she attended San Jose State College after being awarded a National Science Foundation grant. While there she joined teachers from across the nation to be trained in the “New Math” curriculum.

June’s family would like to thank the staffs of Bear Creek Senior Living Facility and Interim Hospice Care, her many friends for their love and support, and the staffs of her favorite restaurants, including Detz’s, Mason Jar, Bon Shopper’s Grill and Susie’s Café. 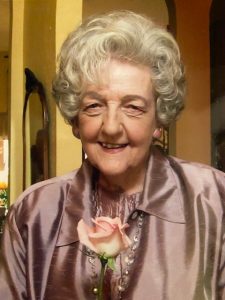