He was a graduate of Okmulgee Oklahoma State Vo-Tech and his life work was spent as a mechanic, farmer and custom harvester.

He and Ruth Hoskins were married February 15, 1958 and they had been married 63 years. They made their home in Cherokee where they first owned a carwash.

Lonnie was a custom harvester who started in 1954 with Donnie Dumbler, then went with Virgil Jenkinson and in 1979 after Virgil’s accident, his son, David, went with the harvest crew until 2000. They started in Randlett, Oklahoma and finished in Chugwater, Wyoming.

Lonnie had worked for car dealerships in Cherokee beginning with Holderby Ford, then Monroe-Miller Motor Company, which became Don Miller Motor Company, and finally Bill Hurst Chevrolet. Lonnie worked as a Certified GM Mechanic for over 45 years and “turned his last wrench on Friday, April 23, 2021 in Wichita, Kansas.”

Lonnie is preceded in death by his parents and his brother-in-law, Jerald Murrow. 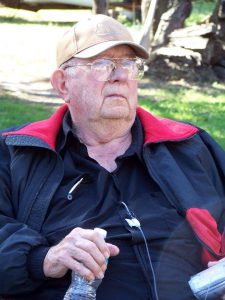