Shirley Ruth Shafer Hurst, resident of Cherokee, was born in Fairview on August 11, 1934 to Guy Irving Shafer and Goldia LaVaughn Bartley Shafer. She passed away Thursday, April 22, 2021 at 11:15 p.m. surrounded by family.

Shirley is preceded in death by her parents, her sister, Vida Lee Bowles and brother, Guy Eugene Shafer.

Shirley is survived by her husband, Billy Don Hurst of Cherokee. May 29, 2021 would have been their 50th wedding anniversary.

At her request Shirley was cremated and a memorial service celebrating her life will be held at 2 p.m., Saturday, May 8, 2021 at the Exhibit Building at Alfalfa County Fairgrounds in Cherokee. Arrangements are by Lanman Funeral Home, Inc. of Cherokee.  www.lanmanmemorials.com. 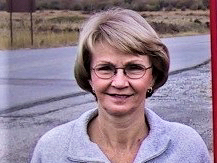