Barbara Maxine Moore was born on September 3, 1937, in Summerdale, AL to Roy Smith Moore and Winnie Ruth Harrison in their home.

She attended elementary school in Alabama until she was in second grade when she moved to Oklahoma with her parents and brothers, Howard and Dewayne.

Her brother Eddie was then born and completed their family. In 1951, she was baptized with her mother and brothers.

Maxine began school in Leedey in second grade and graduated in 1955. She played basketball and softball and participated in 4-H. Maxine liked to run around barefoot until a horse once stepped on her foot. She was proud to be a member of the Leedey Lady Bisons 1955 State Championship basketball team – the only one in the school’s history.

On March 1, 1955, she married Billy Lowell Rounds in Arapaho at the Methodist Church parsonage. They first lived east of Leedey then near Moorewood; a few years later, they established their home and farm west of Red Star. They were blessed with two children, Janet Pauline and Kenny Wayne.

Maxine loved to sew and made most of Janet’s dresses and clothes and Kenny’s and Billy’s western shirts. She was also a wonderful cook. She canned vegetables and fruits, and her specialty was pear honey. Grandma Maxine knew each of the grandkids’ favorite desserts and often made them and put them in the freezer so they were ready anytime the kids showed up for a visit. She baked amazing Italian cream cakes, German chocolate cakes, and homemade rolls.

Maxine embraced her roles as a ranch wife and homemaker, and she served her family, church and community whole-heartedly. She helped work cattle and hauled many home-cooked meals to the harvest fields and was a wonderful mother to Janet and Kenny. She was her grandkids’ greatest supporter and followed them across the country to watch them play ball or show livestock. No matter where they were, she pitched in to help anyone around and always had a bowl of homemade cookies. She and Billy raised their family in the Methodist church, and she served there in a number of ways. For many years she kept the nursery, taught Sunday school, helped with VBS and even sang in the choir. She also served the UMW by organizing many funeral dinners and church potlucks. Maxine volunteered at the Elk City hospital and made bibs for many nursing home residents over the years. Having lived in the country, she loved having company and was always a gracious host to those who stopped in or stayed for a visit.

Maxine took a painting class and enjoyed painting pictures of flowers and farm scenes. She passed on her love of reading to her granddaughters and liked to recommend and share books that she had read. She sincerely cared about others, and much of her time was spent caring for others from her parents and in-laws to her great grandkids. She was the first to lend a hand to anyone who needed it and never showed up without food to share.

Her family will never forget her tenacity and courage throughout her life but especially the last year as she battled cancer. One of her last fights was to meet her twin great grandbabies, and she was so excited to accomplish that. On June 4, 2021, she finally found rest as she passed from this life with her family beside her.

Those left to cherish special memories and live her legacy are her husband of 66 years, Billy of the home; her children Janet and Rick Brown, Cherokee and Kenny and Debbie Rounds, Leedey; grandchildren Gayla and David Failes, Cherokee, Jason and Kristen Brown, Leedey, Jocelyn and Kaleb Humphrey, Crescent, and Sheldon and Chelsie Rounds, Leedey; great grandchildren Blake, Brant, and Breck Failes, Ansley and Shiloh Brown, Kennedy and Briggs Humphrey, and Coburn Rounds; brothers Dewayne and Sue Moore and Eddie and Shawn Moore; mother-in-law Johnie Rounds; brother-in-law Lyle and Catherine Rounds and a host of special cousins, nieces and nephews.

She was preceded in death by her parents, her brother Howard Moore, her father-in-law, Lowell, and nephew Lynn Moore.

Services were held at 10 a.m., Tuesday June 8, 2021, at the Leedey United Methodist Church with burial following at the Red Star Cemetery, Leedey. Condolences may be made to the family at shawfuneralhome.net. Shaw Funeral Home of Leedey. 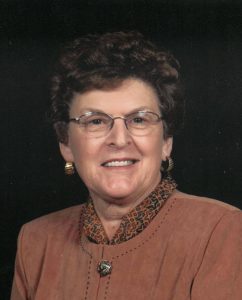