Melvin “Gene” Eugene DeWitt passed away at his home in Cherokee on Friday, August 27, 2021. Born September 1, 1934, he was 86 years old. Through these words, the family shares their love for their husband, father, grandfather and great-grandfather. He was a man that was willing to help anyone in need without thanks or recognition. He instilled his love of agriculture in those who knew and loved him.

On July 1, 1956, Gene married Geraldine “Gerri” Anita Holmes of Wichita, Kansas. Their unconditional love and devotion lasted for 65 years and has served as an example to his children and grandchildren.

Gene was the son of Raymond and Velma DeWitt. He lived and grew up southwest of Carmen on the Eagle Chief Creek. He helped his Grandma Louella Robinson on her farm and it was there he learned that hard work and perseverance are the key to success.

Gene, known as “Red Horse” in high school, graduated from Carmen High School in 1952. He then attended Northwestern Oklahoma State University where he played football. Gene was proud to be an Oklahoma A & M graduate where he obtained a Bachelor of Science degree in Agricultural Education in 1956. He then went on to earn his Masters of Science degree in Agricultural Education from Oklahoma State University.

Gene was excited to obtain his first teaching job at Dacoma High School from 1956 – 1960. He was then hired at Ponca City High School. He was their agriculture instructor and FFA advisor from 1961 – 1973. His students called him “Chief” due to the respect they had for him as a teacher. They won numerous awards in livestock judging, meat judging, and land judging. He had a diverse program that taught those members skills such as public speaking, livestock and land management, and welding. Anyone leaving his program was ready to pursue an agricultural avenue of their choice.

His daughter Cathy was born in 1961 and then a son, Larry, was welcomed into the family in 1964. Gene wanted to provide them the same opportunities he had as a young person growing up in Alfalfa County. He decided to move back to Cherokee and farm full time. Throughout the years he has owned and managed a cow/calf, swine and wheat operation. In fact on Friday, one week before his death, he spent the day driving around the countryside checking and feeding his cattle. He was a true steward to his livestock up until the end of his life here on earth. Because of these qualities, his children and grandchildren have had the privilege to grow and learn from him and feel the pride that comes from a day well spent.

He was preceded in death by his brothers Dean DeWitt and Harvey Ray DeWitt. He is survived by his wife,Gerri, his children, Cathy and Larry, 7 grandchildren, and 9 great-grandchildren. Along with those, he is survived by his sister Carol Salter and husband Tom, Wichita, Kansas, and sister-in-law Joy DeWitt, Wichita, Kansas and numerous nieces and nephews.

Farming was a way of life for Gene through which he taught values and morals to his family and to depend on God’s guidance along the way. His children Cathy Parks and husband Mat of Nash and Larry DeWitt and wife Patty of Cherokee cherished time spent learning from him. His grandchildren that loved him so much who worked diligently by his side and left his legacy to follow are Josh Parks and wife, Mandy, Lahoma, Joel Parks and wife, Jaylene, Jet, Chelsey Tackett and husband, Colby, Cherokee, Grant DeWitt and fiance’ Tori Holt, Tulsa, Cole DeWitt and wife Halie, Tulsa, Samantha Guinn and husband Spencer, Oklahoma City, and Laci Davidson, Cherokee. His nine great-grandchildren who lovingly called him “Papa DeWitt” and meant the world to him; Garrett, Gunnar, Sadie, Quinn, Logan, Haley, Conner, Kasen, and Easton, who he looked forward to seeing everyday.

Gene was a humble person, always helping out his neighbors and never asking for anything in return. Many were inspired by his eye for livestock and his energy that came along with his success. He was a great mentor, friend, and encourager to so many he worked with throughout the years. Some said he was one in a million, one of the greats, old school, honest and one of the best cattle men. His grandchildren described him as a lifelong teacher and coach on everything from sweeping a barn to replacing parts on a tractor. But most of all they were taught the true love of a family and how important it is to follow Christ and to be honorable, kind, and dependable throughout life.

Service for Gene will be Saturday, September 4, 2021 at 10:00 a.m. at the First Baptist Church in Cherokee with the Rev. Bryan Laramore and Rev. Tom Cooksey officiating. Burial will follow in Pleasant Ridge Cemetery, north of Carmen, with arrangements by Lanman Funeral Home Inc. of Cherokee. Facebook: Lanman Funeral Home Inc. Memorials may be given to the First Baptist Church of Cherokee or Cherokee FFA. www.lanmanmemorials.com 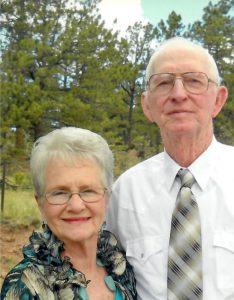