Cherokee chose to kick first in the game, giving the Laverne Tigers the ball to start.

Following the kick-off, the Tigers set up shop on their 31-yard line and five plays later threw a pass which their receiver ran in for a touchdown from 51 yards out. The two point conversion pass was no good and with 9:39 left in the first quarter,the Tigers led 6-0.

Cherokee’s next drive included two runs and an incomplete pass that required the Chiefs to punt the ball.

The Chief defense stepped up and forced a three and out, giving them the ball back on their own 38-yard line.

The Chiefs opened up the drive with a big pass from Lake Lyon to Kolby Roberts to push them to the Tigers’ side of the field. Six plays later, Lyon was able to punch it in from the 1-yard line. Following the failed two-point conversion pass, the game was tied at 6 with 3:13 left in the first.

Laverne’s next drive was cut short after Lyon intercepted the ball on the first play of the drive.

The interception gave Cherokee great field position on the Laverne 39-yard line, but four penalties cost them the drive and it stalled on the 26-yard line, giving the ball back to Laverne. During Cherokee’s drive the first quarter came to a close.

Laverne punted on their next drive after two penalties pushed them back.

The two teams traded one more possession before Cherokee took over with 2:25 left in the second quarter.

The drive lasted just that long, 2:25, as Lyon found Roberts on a 10-yard touchdown pass. The two-point conversion was no good. The drive stretched 81 yards and took 11 plays.

The half came to an end with Cherokee leading 12-6.

Laverne took the ball to start the third and again they were forced to punt. Cherokee had a three and out and they punted as well. For the second straight possession, Cherokee’s defense came up big forcing another punt.

The punt was returned to the Laverne 4-yard line by Lyon, where it took two plays for the Chiefs to score on a Damien Lobato 1-yard scamper. Lobato added the two-point conversion to give them the 20-6 lead with 4:25 left in the third quarter

Laverne punted at the conclusion of their next drive, giving the Chiefs the ball on the Tiger 33-yard-line. Cherokee ran three plays and the third quarter came to a close with them leading 20-6.

The first play of the fourth quarter ended with a turnover on downs for the Chiefs.

Laverne scored on their next drive on an 18-yard touchdown run. The two-point conversion was good, bringing the score within 14 points.

The Tigers did an onside kick and recovered the ball, giving them the ball on the 50-yard line with 4:31 left in the ball game. Two plays later they scored on a 50-yard run. The two-point conversion was no good.

Cherokee took the kick-off and was able to run over three minutes off the clock before they punted the ball.

Laverne started their drive on the Cherokee 40-yard line with 1:13 left in the quarter and after two runs, a spike and incomplete pass, the drive ended on a turnover on downs, giving the ball back to Cherokee with no timeouts for the Tigers.

The Chiefs were able to run the most favorable line-up in football, called the victory formation, and kneel the ball to secure the win 28-20.

• Lobato: six carries for 25 yards and one touchdown and one catch for 15 yards.

• Roberts: one carry for eight yards and five receptions for 52 yards and one touchdown.

Cherokee Head Football Coach Bryce Schanbacher said, “The offense played really well. We have several things to improve on but over all I thought they did a great job.”

The Cherokee defense forced one turnover. The stats are as follows:

• Ramirez: two unassisted, one assisted and one pass deflect.

• Char Smith: one unassisted, one assisted and 1/2 sack.

• Treavor Green: one unassisted and one assisted.

• Aiden Sanborn: two unassisted, one assisted and one sack.

“Defense was great with exception of one drive and two busted plays. They were physical up front and that is exactly what we asked of them,” Schanbacher said.

The Chiefs will host Sharon-Mutual at 7 p.m. Friday with senior night festivities starting at 6:30 p.m.

Schanbacher said about Sharon-Mutual, “They have good size at almost all positions. They really like to line up and run right at you. Should be another physical game.”

His keys to victory are execute on offense, eliminate the penalties and control the line of scrimmage. 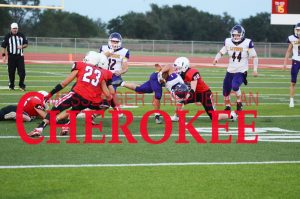 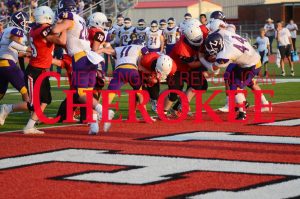