The Timberlake Tigers advanced to 3-0 on the season after defeating the Waukomis Chiefs 54-6.

The Tigers opened the game with the ball and following the kick-off, it took JJ Pippin one play and 13 seconds to score the 60-yard touchdown. Ethan Jenlink and Colten Lormand connected for the two-point conversion.

After the ensuing kick-off, the Chiefs were held to a three out and forced to punt the ball back to the Tigers.

The punt went out of bounds, and it was marked at the Chiefs 12-yard line where Timberlake set up.

One play later Jenlink found the endzone on the ground. The pass attempt on the two-point conversion was no good. Timberlake led 14-0 with 10:31 left in the first.

The Tigers held the Chiefs on three downs, but a roughing the passer call against Timberlake gave Waukomis the first down. Three plays later they fumbled the ball with Carter Sands recovering.

Sands backed up the defense play with a 23-yard touchdown run of his own. Jenlink and Avery Wallace connected on the two-point conversion to increase the lead to 22-0 with 7:53 left in the first.

On Waukomis’ ensuing drive a three and out forced a punt and Merric Judd took it 52 yards to the house for the touchdown. The pass attempt on the two-point conversion was no good.

The Tiger defense again held Waukomis and forced a turnover on downs.

A holding call on the second play of the Timberlake drive held them up and an incomplete pass on fourth down gave the ball back to the Chiefs.

Three plays into the Waukomis drive, the first quarter ended with Timberlake up 28-0.

Waukomis moved the ball a little but came up short on the fourth down, six plays into the second quarter.

Timberlake started their drive on the Chiefs’ 45-yard line and despite picking up one first down, the Tigers had a turnover on downs on the Chiefs 29-yard-line.

Waukomis capitalized on the turnover on downs and scored on a six play, two minute and 17 second 76-yard drive. The touchdown came through the air on a 50-yard pass. The two-point conversion was no good.

Following the touchdown, on the ensuing kick-off Pippin returned the kick-off for 60-yards and the touchdown. The run attempt on the two-point conversion was no good and the Tiger lead increased to 34-6, with 4:44 left in the second.

On the kick-off, Pippin was able to recover the kick and give the ball back to the Tigers.

The Tigers’ drive started on the Chiefs’ 38-yard line. Blake Choate carried the ball 15yards to start the drive, then Braedyn Ullrich rushed for 5 before Choate ran in the 18-yard touchdown. The run attempt on the two-point conversion was no good.

A turnover on downs set up the Tigers for a two-minute offense on the Chief 38-yard line and with two seconds left in the first half Ullrich rushed for the 10-yard touchdown. The two-point conversion run by Karson Shepard was good and Timberlake led 48-6.

Following the fair catch, Waukomis had one play and it was for a loss of 1 yard and the first half came to a close.

Waukomis took the second half kick-off and put together a drive that made it all the way down to the Timberlake 5-yard line, where the Tiger defense held them on fourth down.

The first play from scrimmage was a 95-yard touchdown by Choate, but a penalty called it back to the Timberlake 44-yard line where Choate finished the run and game on a 56-yard touchdown run.

The game ended with 6:56 left in the third quarter.

• Sands: One carry for 23 yards and one touchdown.

• Jenlink: One carry for 12 yards and one touchdown.

• Judd: One punt return for 52 yards and one touchdown.

The Tigers will enter a bye week before opening district play on the road at South Coffeyville. 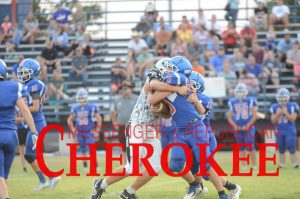 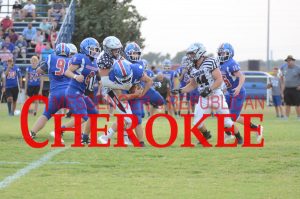 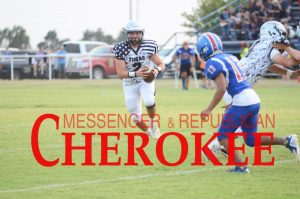 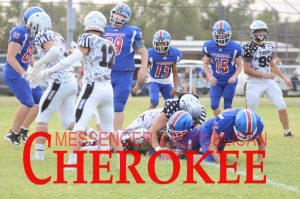 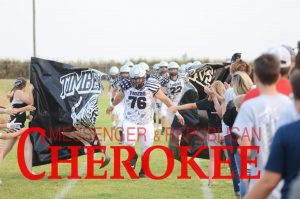 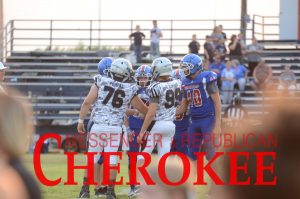