Ringwood won the opening coin toss and elected to kick to open the game.

Timberlake’s Dalton Leierer pounced on the opening kickoff to give the Tigers first down on their own 41. On the first play from scrimmage, Ethan Jenlink connected deep with Merric Judd on a touchdown strike and Timberlake was quickly out front 0-6.

The two-point conversion attempt failed and the score remained 0-6 with 11:49 to play in the first quarter.

Avery Wallace brought the hometown crowd to their feet on the ensuing kickoff as he took the ball and raced his way to the Timberlake 28 before he was taken down.

Back-to-back carries from Wallace yielded a couple yards before Jaxon Meyer burst through the Tiger defense for a 23 yard touchdown run. A yellow hankie saw Meyer’s touchdown run negated however, and the ball was moved back to the 24.

On the replay of third down, the Red Devils were blown up in the back field, resulting in a four yard loss bringing up fourth and long.

Meyer connected with Wallace on fourth down but the completion left the Red Devils well short of the first down sticks to see the ball go back to Timberlake.

Timberlake started at their own 28 after the turnover on downs and J.J. Pippin gained seven yards on the ground on first down.

After a short gain on second down, Pippin followed his blockers to the Tiger 41 for a first down. One play later, Judd appeared to score from 59 yards out only to see a holding penalty bring the ball back to the 40.

Carries by Judd, Jenlink and Pippin moved the ball well into Red Devil territory at the 38.

On first down Jenlink found Judd through the air for a gain of 26 to move the ball to the 12.

Three straight runs by Pippin left the Tigers with a first down a yard from the endzone before Judd connected with Jenlink for a one yard touchdown completion. Pippin muscled his way into the endzone on the two-point conversion try and the score stood at 0-14 with 5:37 left to play in the first quarter.

Wallace ripped off a gain of 22 yards on first down to see the ball on the Timberlake 38.Back-to-back gains by Cesar Charqueno yielded minimal yards before a pass from Meyer to Crawford to move the ball to the 16 .

Undeterred Ringwood persevered as Meyer found Wallace through the air to put the Red Devils on the board with the 20 yard touchdown completion.

The two-point conversion try was no good and the score was 6-14 with 2:01 remaining in the first quarter.

Dylan Schlup reeled off a decent return on the ensuing kickoff and the Tigers went to work from the Ringwood 46.Following a gain of 11 on first down, the Red Devil defense stiffened and forced the Tigers to punt the ball away on fourth down.

A booming Timberlake punt saw the ball go into the endzone for a touchback and Ringwood began their next drive from their own 20. Great defense by the Tigers left the Red Devils going three and out and punting on fourth down.

Timberlake began their drive from the Ringwood 47 and after a incomplete pass on first down, Pippin found a seam and burst ahead for a gain of 29, moving the ball to the 18.

Pippin racked up seven more yards on the next play before the Tigers found the endzone on an 11 yard Judd touchdown run. Jenlink kept the ball himself and crossed the goal line on the two-point conversion and the score stood at 6-22 with 9:55 left to play in the first half.

Cody Conaway secured the onside kick for the Red Devils at the Ringwood 49. The Red Devils were able to work into Timberlake territory at the 34 before an incomplete pass on fourth down saw the ball go over on downs to Timberlake.

The Tigers set up shop at their own 34 yard line and on first down Jenlink found Judd for a 66 touchdown pass. But, for the third time in the contest, a touchdown was negated due to a flag.

The penalty saw the ball moved back to the 24. Back-to-back Jenlink passes to Pippin and Judd moved the ball to the 27. A pass then fell incomplete but the Red Devils were flagged for hands to the face and the ball was moved to the 22.

One play later Jenlink found Pippin for a 22 yard touchdown pass. Carter Sands carried the ball on the successful two-point conversion and the score was 6-30 with 4:32 remaining in the first half.

Ringwood again fielded the onside kick attempt as they went to work from their own 48. Facing a fourth down and 11, the Red Devils were forced to punt the ball back to the Tigers.

The Tigers took over on their own 37 and were looking to be on a productive drive until the Red Devils forced a fumble that ended up in Ringwood’s possession.

Incomplete passes were sandwiched between a four yard run by Meyer to leave the Red Devils facing a fourth down and six. Ringwood elected to punt the ball away and Judd returned the ball to the Ringwood 46.

A block in the back penalty on the return saw the ball moved back to the 32. After an incomplete pass and a false start, the Tigers were facing a second down and 15 with only a few seconds left in the first half.

One play later Jenlink hooked up with Judd for a 68 yard touchdown pass. Sands carried the ball for the two-point conversion and the score stood at 6-38 at halftime.

Ringwood received the ball to open the second half, before Charqueno carried the ball for a gain of 23 on second down. One play later Leierer timed a pass correctly and came away with an interception at the Timberlake 38 and raced his way all the way to the eight yard line before being tracked down from behind.

On first down Leierer was able to put the ball in the endzone as he scored from one yard out and the score stood at 6-44 after the failed two-point conversion.

Ringwood was able to cover the onside kick attempt at their own 43. Back-to-back carries by Wallace moved the ball to the Timberlake 43 before Wallace was able to fall on a fumble at the 45. A sack and incomplete pass left the Red Devils facing a fourth down and 18.

The Red Devils elected to punt the ball away and a great kick forced the Tigers to face a long field as they went to work at their own eight yard line.

A holding penalty on first down moved the ball back to the three yard line, leaving the Tigers with an even longer field.

Pippin reeled off a gain of 26 to move the ball to the 26 before Sands broke free and made his way to the Red Devil 26.

One play later Leierer made his way into the endzone from 26 yards out. Jenlink did the honors on the two-point conversion to end the ball game with just over six minutes left to play in the third quarter as the Tigers earned the 6-52 victory.

The Tigers will host Waukomis at 7 p.m., Friday, Sept. 11, with senior night festivities kicking off prior to the game starting. 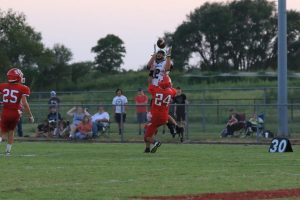 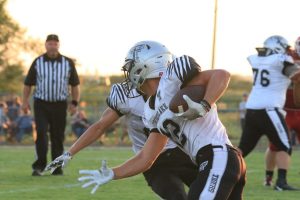 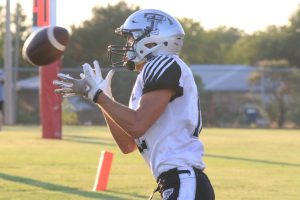 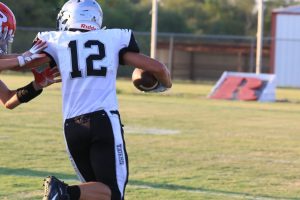 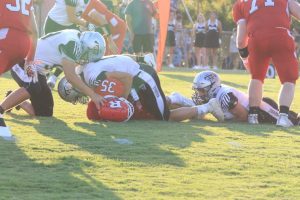