The Chiefs received the ball to start the game. The ball was returned to Cherokee 32-yard line where they set up shop. A three and out gave the ball to the Mustangs.

The Cherokee defense held their ground and forced a three and out of their own.

Cherokee began to move the ball on their next possession, but a fumble gave the ball back to the Mustangs.

Pioneer moved the ball to the Chiefs’ 37-yard line before they were unable to get a first down following a holding call.

With 2:39 left in the first quarter the ball went back to Cherokee on their own 37-yard line. A run by Damien Lobato set up a 61-yard touchdown run by Lake Lyon. Lyon and Ruston James connected on the two-point conversion to remove the goose egg from the scoreboard and give them the 8-0 lead with 1:43 left in the first.

Pioneer was able to run three plays following the kick-off before the first quarter came to a close. Pioneer was later to move the ball down to the Cherokee 4-yard line before an incomplete pass on fourth and goal gave the ball to Cherokee.

Cherokee began to put a drive together that took 5:55 seconds before they scored on a Lyon 2-yard run. The drive stretched 96 yards and took 11 plays. The clock ran down to one minute on the score. Lyon found Gabe Wyatt for the two-point conversion to give them the 16-0 lead.

The first half came to a close during the ensuing drive by Pioneer.

Pioneer received the second half kick and took it to their 36-yard line where they began the drive. Four plays later and they ran in a 1-yard touchdown. The two-point conversion was no good and Cherokee led 16-6 with 10:08 in the third quarter.

The Chiefs answered back on their next drive scoring on a short run by Lyon. The drive took two minutes and 22 seconds to go 73 yards. The drive consisted of five runs and one incomplete pass. The score came at the 7:46 mark in the third quarter.

Cherokee’s defense stood tall on the next drive when Lyon forced a fumble, which he recovered.

But the Chiefs were unable to gain any momentum and three plays later they were forced to punt the ball.

The first play of the fourth quarter the Mustangs scored on a 10-yard run. The two-point pass was no good and the lead was cut to 22-12.

Each team traded punts and then the Chiefs’ next drive took five and 33 seconds before they were unable to pick up a first down and had a turnover on downs.

Pioneer only needed one play, scoring on a 69-yard pass. The two-point conversion was good and Cherokee led by two with 3:20 left in the game.

Cherokee’s next drive used the rest of the clock, but kept fans on the edge of their seats when they ran a one yard run on fourth and 1 on their own 19-yard line and Lobato was able to gain the first down, securing the win for the Chiefs, 22-20.

“The offense played well against a much bigger defense.  We need to make some adjustments to a few things and continue to build on our strengths as we move forward in our season,” said Cherokee Head Football Coach Bryce Schanbacher.

• Charlten Smith: one carry for 4 yards.

• Damien Ramirez: one catch for 7 yards.

The defense forced one fumble and held the Mustangs out of the endzone on two of the three two-point conversions.

“Defense really played well, especially coming up with some very big stops inside the redzone.  We got out of position twice in the second half and Pioneer made us pay for that,” Schanbacher said.

• Lyon: 11 unassisted, four assisted, two pass deflects and two fumble recoveries with one being an offensive.

• Lobato: five unassisted and one assisted.

Ramirez: four unassisted, one assisted and one pass deflect.

• Treavor Green: one unassisted, one assisted and one pass deflect.

The Tulsa World ranked number four Chiefs will travel to Shattuck to take on the number one ranked Indians at 7 p.m., Friday, Sept. 18.

When asked what he expects out of Shattuck, Schanbacher said, “Exactly what you think, they are very good on both sides of the ball and they really play mistake free.  They run their quarterback mostly and he throws well.  We will definitely have to play our best ball on Friday.”

His keys to victory are to eliminate mistakes and force turnovers. 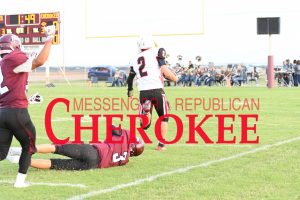