The Tulsa World ranked number one team in Class C held their top spot after defeating Waukomis 56-6 in Helena.

Timberlake took the opening kick-off to began the game. They set up shop on the 44-yard line where it took them four plays before Ethan Jenlink ran in a 5 yard touchdown. The pass from Jenlink to Merric Judd was good and with 54 seconds off the clock, they were up 8-0.

Following the ensuing kick-off to the Chiefs, the Tiger defense had them where they wanted with a 4th and 1 on the Waukomis 32-yard line, but an encroachment penalty gave the Chiefs a first down. However, an offensive start penalty, two sacks and a run for a loss forced the Chiefs to punt back to the Tigers.

The ball was returned to the Waukomis 32-yard line where the Tigers set up shop with 6:48 left in the first.

The drive started with an incomplete pass to Dylan Schlup. Five plays later Jenlink and Schlup connected for an 8-yard touchdown pass and catch. The two-point conversion pass was no good and with 5:27 left in the first quarter, the Tigers were up 14-0.

Waukomis looked like they were going to get on the board after using almost all of the time left in the first quarter. Starting at Timberlake’s 40 yard line, they went all the way to the Tigers’ 3 yard line before a fumble, recovered by JJ Pippin, gave the ball back to Timberlake on the Waukomis 1-yard line with just seconds left in the first quarter.

Pippin followed the fumble recovery up with a 99-yard touchdown run. Jenlink and Schlup connected on the two-point conversion to give them the 22-0 lead with three seconds left in the first quarter.

The Chiefs had time to return the kickoff for 10 yards to the Waukomis 14-yard line before the first quarter came to a close, with the Tigers leading 22-0.

Waukomis was able to move the ball from their 14-yard line to the 31-yard line before they fumbled, which was forced by Dalton Leierer and recovered by Cameron Brewer.

The Tigers capitalized on the turnover and three plays later Jenlink connected with Judd for a 13-yard touchdown pass. The two-point conversion was no good and the Tigers led 28-0 with 8:18 left in the game.

Waukomis set up on their own 40-yardline where they were able to run 10 plays before they failed to convert on a fourth and six on the Tiger 32-yard line, giving the ball back to the Tigers.

Timberlake had another three play drive that ended when Jenlink found an open Leierer for the 11-yard touchdown. Jenlink connected with Schlup for the two-point conversion to give them the 36-0 lead with 3:05 left in the first half.

The Timberlake defense forced a three and out and Judd returned the punt to near midfield where they began their drive. The next play Judd finished what he started on the punt when Jenlink hit him for a 52-yard touchdown pass. Schlup’s two-point conversion run was no good and the Tigers led 42-0 with 1:04 left in the quarter.

An onside kick recovered by Pippin gave them the ball back with 1:04 left on the clock. Two plays later and the Tigers fumbled it, leaving two seconds on the clock.

Waukomis kneeled the ball to end the first half with Timberlake up 42-0.

Waukomis received the second half kick-off and returned it 80-yards for the touchdown. The two-point conversion was no good.

On the ensuing kick-off, Judd returned the ball to near midfield again and after a big pass play from Jenlink to Schlup for 48 yards, the Tigers were set up on the 7-yard line of Waukomis. Pippin ran in the touchdown and Jenlink found Judd for the two-point conversion, putting them up 50-6 with 11:21 left in the quarter.

The Tiger defense forced a three and out and on the ensuing punt, Judd returned it 72 yards to the house for the touchdown to put the Tigers up 50 and ending the game with 8:55 left in the third.

“I was pleased with how the offense looked. We looked sharper than last week,” Timberlake Head Football Coach Brian Severin said.

• Pippin: four carries for 129 yards and touchdowns and two catches for 33 yards.

• Judd: four catches for 110 yards and two touchdowns, three punt returns for 119 yards and one touchdown and one kick return for 23 yards.

• Schlup: three catches for 96 yards and one touchdown.

• Leierer: one catch for 11 yards and one touchdown.

On the defense side of the ball, Waukomis ran 38 plays for 111 yards. All 111 yards came on the ground with one pass attempt being unsuccessful. The Tigers forced two fumbles and recovered both.

“The power run right at us gave us some trouble. We are going to make adjustments. I thought we played well though,” Severin said.

The Tigers will enter an off week this Friday and during the off time, Severin plans to work on conditioning, special teams, tone things up that needed corrected and get ready for district play.

The Tigers will take the field at 7 p.m., Sept. 25 at Helena against South Coffeyville. 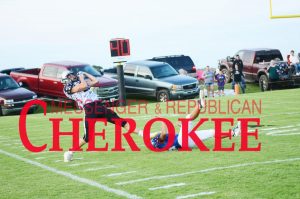 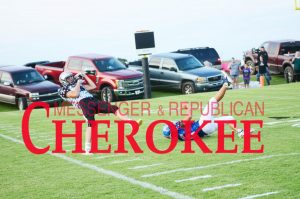 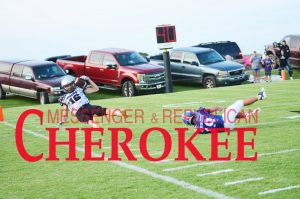 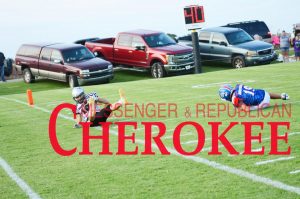 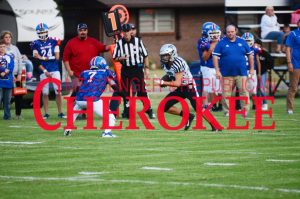 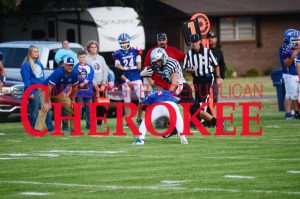 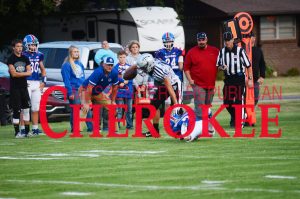 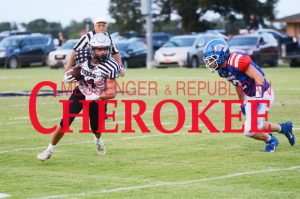 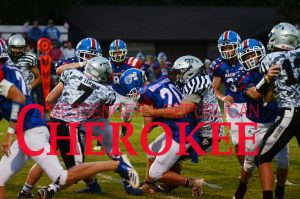