After a two day delay due to weather, the Northwest Shootout in Fairview got underway Sept. 12, and in their first action in the tournament, the Cherokee Lady Chiefs found themselves facing the Crescent Lady Tigers.

Following the coin toss, Cherokee had the first opportunity to put runs on the board as they were on offense first as the visitors. Top of the first opened with a groundout by the Lady Chiefs before Laynie Golden earned a free base after drawing a walk.

Following a flyout, Riley Hensley singled to give Cherokee two runners aboard bases with two outs. One crack of the bat later, Madysen Ryel delivered a well-hit two RBI double to drive in Golden and Hensley. A groundout one at bat later ended the Cherokee portion of the first with Ryel left on base.

Bottom of the first saw the Lady Tigers lead off with a groundout to Golden at third, before they got first base runner one hitter later by way of a single. Ryel then made up a heads up play inside the circle as she fielded a grounder and fired to second in time to get the out on the lead runner for the second out of the inning. A groundout to Hensley at short stop by the next hitter ended the first inning with Cherokee on top, 2-0.

Top of the second saw the Lady Chiefs struggle to get the offense going as they went three up and three down. Bottom of the second helped determine the outcome of the game as the Lady Tigers transformed one walk, four hits and a couple of errors into four runs. Through two innings of play the Lady Chiefs trailed 2-4.

After back-to-back outs to begin the top of the third, Hensley singled to shallow left field to give Cherokee life. While Gaby Solis was at the plate, Hensley dazzled the Cherokee faithful present as she proceeded to steal second and third bases. Unfortunately, a strikeout saw Hensley stranded on third.

The Lady Chiefs were able to force the Lady Tiger runner into a run down between second and third base, before a throw back to second base was dropped and the Crescent runner was safely back at second.  However; the craziness was only beginning. Thinking she was out, the Crescent runner left second base and started walking toward the dugout on the third base side of the field.  Realizing her mistake, the Lady Chiefs again got the runner into a second run down and this time the Lady Chiefs executed perfectly for the second out of the inning. A groundout then brought the curtain down on the fourth inning with only a handful of minutes left before the game reached its time limit.

Cherokee appeared to be in trouble to start the top of the fifth as the first two hitters were retired in succession before Golden connected for a well-hit double into left field. Golden was able to steal third during Hensley’s at bat but a popout ended the game with Golden left stranded and Cherokee coming up short, 2-7.

Districts will be coming up for the Cherokee Chiefs as they will travel to Mooreland to take on the Lady Bearcats. One team from the district will advance to the regional tournament. The brackets will be determined following the district tournament meetings, which are to be held between Sept. 16 and 18. 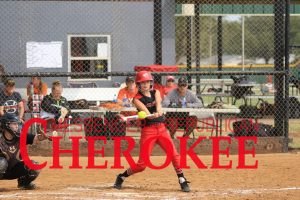 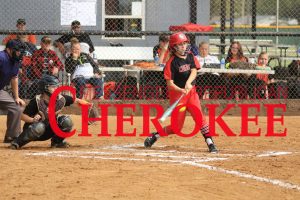