The Cherokee Chiefs suffered their first football loss of the season at the hands of the Shattuck Indians.

The number four ranked Chiefs traveled to Shattuck to take on the number one ranked Indians, according to the rankings released by the Tulsa World.

Cherokee kicked the ball off to start the ball game. Shattuck began their drive at their own 41-yard line.

Following six rush plays, the Indians were able to get on the board with a 1-yard touchdown run. The attempt on the two-point conversion was no good and with 9:31 left in the first quarter, Shattuck led 6-0.

Cherokee began their first drive of the ball game on their 37-yard line. The Chiefs were able to move the ball to midfield before two incomplete passes saw the drive come to a close and Kolby Roberts punted the ball. The ball was downed on the 13-yard line where the Indians set up shop. Two plays later,  Shattuck fumbled the ball and it was recovered by Treavor Green for Cherokee to set the Chiefs up with first and 10.

Cherokee began to put a drive together with seven runs and three pass attempts, but they were unable to gain a first down on a fourth and 7 from Shattuck’s 17-yard-line.

The first play of the Indians’ next drive was for 83 yards and a touchdown. The two-point conversion was good and Shattuck led 14-0 with 1:46 left in the first.

Cherokee began their drive on their 40-yard-line. Three runs later the first quarter came to a close with Cherokee trailing 14-0. The fourth play into the second quarter ended the drive with an interception.

Shattuck capitalized on the turnover and on the first play of their drive ran in a touchdown from 65 yards out. The two-point conversion was good and Shattuck led 22-0 with 10:19 left.

Cherokee took the ensuing kick-off and returned it to their 27-yard line where they began the drive that consisted of six passes and eight runs plays, plus a couple of defensive penalties that ended with a 12-yard touchdown from Lake Lyon to Roberts. The two point conversion was no good and the lead was cut to 22-6 with 3:26 left in the second.

Following the kick-off, Shattuck was able to find the endzone on a one play run for 59 yards. The two-point conversion was no good.

Cherokee began their next drive on their 23-yard line and four plays later gave the ball back to Shattuck in way of a fumble.

Shattuck made quick work of what was left in the second quarter to find the endzone on a 14-yard pass. The two-point conversion was good and Shattuck led 36-6 with 33 seconds left in the half.

Following the kick-off and one run play, the first half came to a close.

Cherokee took the second half kick-off and returned it to their 30-yard line where they set up shop. Four plays later and on a fourth and one on Cherokee’s 39-yard line, they were unable to gain a first down and gave the ball to the Indians.

Shattuck began their drive with two penalties before breaking free for a 46-yard touchdown run. The two-point conversion was good and Cherokee trailed 44-6 with 9:01 left in the quarter.

Needing a score to prevent being mercy ruled, Cherokee put together a drive that started on their 32-yard line and ended with a touchdown by Lyon from 1-yard out. Damien Lobato added the two-point conversion and the lead was cut to 30. The drive stretched 68 yards and took 11 plays. The score came at the 6:11 mark in the third quarter.

Shattuck followed up the Cherokee score with a two minute and 30 second drive that went 59 yards and ended on a 34-yard touchdown run. The two-point conversion pass attempt was no good.

Cherokee had a quick answer for Shattuck on three play 80 yard drive of their own. Lyon scored the touchdown on a 45-yard run. The pass attempt on the two-point  conversion was no good and the lead was again cut to 30 points.

During Shattuck’s next drive, the third quarter came to an end with the score at 50-20.

Six seconds into the fourth quarter Shattuck scored on a 5-yard run. The two-point  run was no good.

The Chiefs took the ensuing kick-off to their 39-yard line. Five minutes and 12 seconds later, Colby Roach found the endzone on a 3-yard run. Ruston James and Gabe Wyatt connected for the two-point conversion to cut the lead to 56-28. Cherokee’s drive stretched 61 yards and took 10 plays.

Shattuck scored one more time in the game on their next drive on a 36 yard run. The two-point conversion was good and Shattuck led 64-28 with 4:01 in the game.

Following a punt by Cherokee, Shattuck was able to run out the clock and secure the win.

• Lyon: 14-23 passing for 127 yards with one touchdown and one interception and 16 carries for 91 yards and two touchdowns.

• Roach: two carries for 18 yards and one touchdown.

• Roberts: one carry for 5 yards and six catches for 76 yards and one touchdown.

• Damien Ramirez: one carry for -2 yards and one catch for 5 yards.

• McHenry: three unassisted and one assisted.

• Roach: one unassisted and one assisted.

• Green: one unassisted, one assisted and one fumble recovery.

• Zach Hellar: one assisted and one unassisted.

• Jackson: one assisted and one fumble recovery.

The Chiefs will travel to Seiling to take on the Wildcats at 7 p.m., Friday, Sept. 25. Cherokee will return home on Oct. 15 after playing on the road at Waukomis. 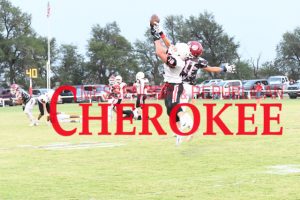 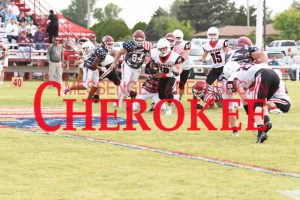 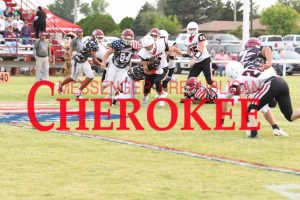 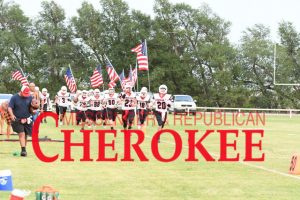