The Cherokee Chief football team bounced back following a loss on the road to Shattuck with a 46-0 win over the Seiling Wildcats.

The Wildcats took the ball to start the game and began their drive on their 35-yard line. The Chief defense came out strong on the first drive and forced a punt after two runs and an incomplete pass.

Cherokee’s Lake Lyon returned the punt for 20 yards to set them up for 1st and 10 on the Chiefs’ 35-yard line.

Cherokee put together a drive that featured runs by Lyon, Damien Lobato, Ruston James and passes from Lyon to Kolby Roberts and James before Lyon ended the drive with a 27-yard run. Lobato added the two-point conversion to give Cherokee the 8-0 lead with 7:40 left in the quarter.

On the ensuing drive, the Wildcats put together a drive that started on their 35-yard line but ended on a 4th and 19 incomplete pass on Cherokee’s 26-yard line.

The first quarter came to a close during Cherokee’s next drive with them leading 8-0.

The first play of the second quarter was a punt by Roberts to the Wildcats.

Seiling began on their 20-yard line and worked the ball down to Cherokee’s 43-yard line before a fourth down run was short of the first down marker, giving the ball back to the Chiefs.

Cherokee capitalized on the next drive and after a six play drive, they scored when Lyon ran in the 9-yard touchdown. Lobato added the two-point conversion increasing Cherokee’s lead to 16-0. The drive was helped with runs from Lobato, James and Lyon.

On Seiling’s next drive, they began at their 26-line and again were able to get the ball moving all the way to Cherokee’s 13-yard line before an incomplete pass on fourth down stalled the drive, giving the ball back to Cherokee with 2:40 left in the quarter.

Cherokee went three and out on their next drive to give the ball back to Seiling with 1:09 left in the second quarter.

Seiling ran the clock out during the drive after moving the ball down to Cherokee’s 15-yard line.

Cherokee made quick work in the third quarter following the kick-off when Lyon broke off for a 66-yard touchdown run. Lobato added the two-point conversion and with 19 seconds gone off the clock, Cherokee led 24-0.

The Cherokee defense forced a punt on Seiling’s next drive.

Cherokee moved the ball 46 yards on their next drive with runs by Colby Roach, James and Lyon. Lyon scored on a 6-yard run and James added the two-point conversion to put the lead to 40 with 30 seconds left in the third quarter.

On Seiling’s next drive, the quarter came to a close with Cherokee leading 40-0.

The Wildcats’ drive ended on a fumble and Cherokee recovery.

Cherokee was able to end the game when Kai McHenry ran in a 5-yard touchdown. The drive featured runs by McHenry and Xander Jackson.

• Lobato: nine carries for 100 yards and two catches for 1 yard.

• McHenry: three carries for 30 yards and one touchdown.

The Cherokee defense held the Wildcats scoreless and to 160 yards on 51 plays. Seiling rushed 32 times for 66 yards and threw the ball 9-19 for 94 yards.

• McHenry: one assisted and one fumble recovery.

• Damien Ramirez: one unassisted and one assisted.

• Julius Luster: one unassisted and one assisted.

Cherokee has an off week this Friday and will pick up action on the road at Waukomis at 7 p.m., Friday, Oct. 9. 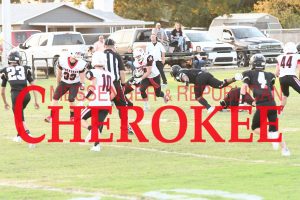 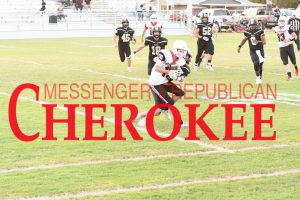 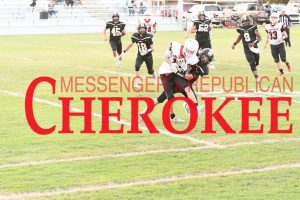 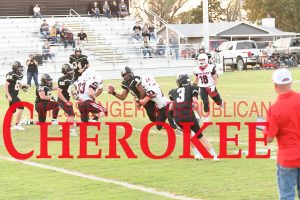 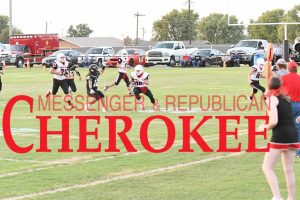 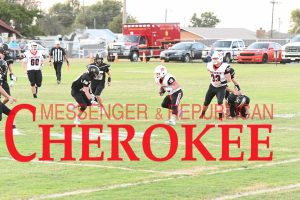