The Cherokee Lady Chiefs traveled to Mooreland Sept. 24, to begin their quest for a District Championship. Standing in the way of the title though, would be the host team Lady Bearcats, who had an impressive 28-4 record and the #6 ranking in Class A heading into the tournament.

First game of the day saw the Lady Chiefs swinging the bats first as the Lady Cats won the opening coin toss and the right to be home team in the contest.

Cherokee again went three up and three down to start the second inning as the game went into the bottom of the first with Mooreland on top 0-2.

Defensively, the Chiefs stepped up in the bottom of the second as they allowed just two hits and surrendered one run. Through two innings of play the Lady Chiefs trailed 0-3.

A strikeout kicked off the top of the third inning before Zoey Morris drew a walk to give Cherokee their first base runner of the contest.

Sophie Cantellay kept the Lady Chief momentum going as she singled to give Cherokee two runners on base with one out. Unfortunately, a double play turned by the Lady Cats on a bunt popout on the next at bat saw the Cherokee squaring threat ended.

Mooreland expanded their lead in the bottom of the third thanks in part to an inside-the-park homerun. One additional run would score in the inning as the game headed to the fourth inning with Cherokee trailing 0-5.

Following a groundout to open the fourth, Riley Hensley singled to give the Lady Chiefs a runner on base. Unfortunately, back-to-back popouts saw Hensley left stranded as the game went to the bottom of the fourth.

Bottom of the fourth saw several Cherokee errors and well hit Mooreland balls culminate into four runs for the Lady Cats. The runs were enough to leave the Lady Chiefs needing to score at least two runs in the top of the fifth to avoid the run-rule.

Unfortunately for the Lady Chiefs, they went three up and three down in the top of the fifth as Mooreland secured the 0-9 run-rule victory.

In the second game of the day, the Lady Chiefs won the coin toss and the right to be the designated home team as they went on defense first.

It was another solid defensive showing for Cherokee in the top of the second as they allowed just one run on four hits despite having the bases loaded at one point.

Gaby Solis drew a walk to open the bottom of the second before Carson Schanbacher singled to give Cherokee two runners on base with one out. Solis would then try to score from  third on a passed pitch but was tagged out at the plate. Schanbacher was left stranded and the score stood at 0-2 after two innings of play.

Cherokee continued their great defensive play into the third inning as they gave up one run yet again on two hits.

Bridget Wilhite drew a walk to kick things off in the top of the fourth inning but she was thrown out on a force play one at bat later on a single by Cantellay.

Lexi Williams singled and the Lady Chiefs had two runners on base with one out. Unfortunately, a strikeout and popout ended the inning with Cantellay and Williams stranded on base as the game went to the top of the fourth with Cherokee trailing 0-3.

Unfortunately, just like the first game of the day, the contest would be turned on its head by the fourth inning.

Errors, along with seven Mooreland hits and two walks, allowed the Lady Cats to blow the game wide open as they scored eight runs to go up 0-11.

With Cherokee’s backs up against the wall, Solis drew a walk to open the top of the fourth as the Lady Chiefs had hopes of extending the contest to another ending.

While Wilhite was at bat, Solis pulled off a Harry Houdini move as she escaped a run down to score the first run of the day for the Lady Chiefs. Unfortunately, a strikeout saw the contest end with Mooreland getting the 1-11 victory to end the Lady Chief season. Playing in the final game of their career as Lady Chiefs were Solis, Laynie Golden, Wilhite and Hailey Campbell. 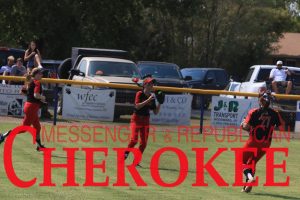 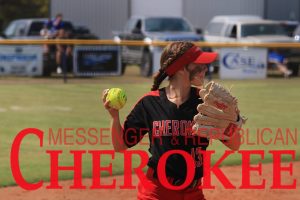 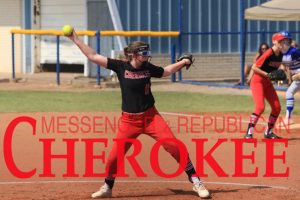 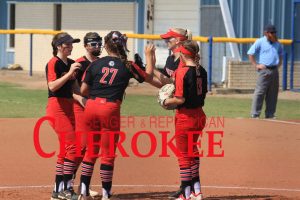 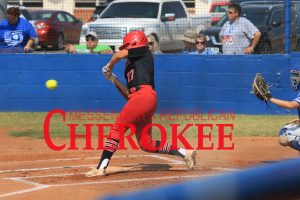