Cimarron Lady Blazers and Timberlake Lady Tigers squared off in the opening round of the Fast Pitch Softball District in Lahoma Sept. 23. Timberlake won the coin toss and the right to be the home team as they took the field on defense first.

Sydney Harmon delivered a bunt single to begin the top of the first for Cimarron. After back-to-back strikeouts, Harmon came into to score after a combination of stolen bases and passed pitches. A groundout saw the top of the first close with Harmon scoring and no runners left on base.

Kinlie Judd found her pitch and delivered a RBI single to score Phillips and the game was tied at 1-1. A RBI sacrifice groundout by Summer Finney drove in Tharp to put the Lady Tigers 1-2 with a runner on base and one out.

Kyra Coker kicked things off in the top of the second with a lead off walk. She would go on to score on a combination of steals and passed pitches. Kayla Osborn also made her way on base by way of a walk but she was left stranded on base as Cimarron’s portion of the second ended.

Bottom of the second saw the lead off hitter groundout to Zoe Coker at second before Hayli Watkins was hit by a pitch to be Timberlake’s first base runner of the inning.

Phillips and Tharp both made their way on base to see the bases loaded with Lady Tigers having one out.

Judd then delivered a two-RBI double to score Watkins and Phillips. Summer then connected for a RBI sacrifice groundout to score Tharp and the Lady Tigers went up 1-5 with two outs.

Judd then scored on a passed pitch before Henslee Powell and Gaff made it on base by way of a walk and hit by pitch. A groundout to Tobie Moore one at bat later saw the second conclude with Timberlake up 2-6.

Harmon drew a walk to get the top of the third started for Cimarron. Kadi Bergdall was then hit by a pitch to give Cimarron two runners on base with no outs. Zoe Coker then delivered a two-RBI single to score Harmon and Bergdall.

Following a groundout, Kyra Coker delivered a RBI double to score Zoe and the Timberlake lead was cut to one at 5-6.

Following a groundout, Hailey Wisel then connected for a RBI single to score Kyra and the score was even at 6-6. A groundout one at bat later left the score tied at 6 going into the bottom of the third.

The Lady Blazer defense then forced Timberlake to go three up three down in the bottom of the third and the game moved to the fourth with the score gridlocked at 6-6.

Top of the fourth opened with a groundout before Harmon made it 3-3 on the game with a single. She would be stranded on base though, as back-to-back outs sent the game into the bottom of the fourth tied.

Tharp singled to lead off the bottom of the fourth and she was advanced on the base paths on a groundout by Judd. A RBI sacrifice groundout by Summer brought Tharp in to score and Timberlake went back on top, 6-7.

A groundout to Moore at first saw the fourth close with Timberlake on top 6-7. Both teams had scoring opportunities down the stretch but they were all for naught as Timberlake went on to pick up the win 6-7.

In the first game of the day Sept. 24, Cimarron fell to Drummond to see their season come to an end. The Lady Tigers, on the other hand, went on to defeat Drummond 16-0 and 10-4 to clinch the District Championship. 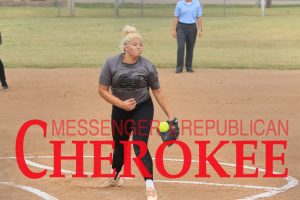 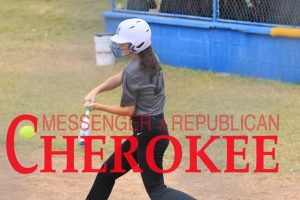 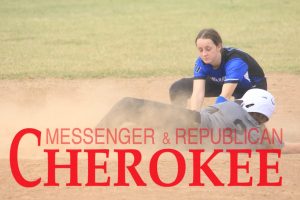