Buffalo traveled to Cherokee to take on the Chiefs, with Cherokee winning 36-18.

Buffalo started the game with the ball on their 30-yard line following the kick-off and return.

The Bison were able to get some help at the beginning of the series when Cherokee gave them 5 yards on a defensive encroachment penalty. Buffalo then ran the ball four times picking up a first down, but an offensive false start and an incomplete pass ended the drive and forced a punt to the Chiefs.

Lake Lyon returned the punt to the Chief 38-yard line where they set up their drive. Three plays later Cherokee scored when Lyon broke free for a 57-yard touchdown. Runs by Damien Lobato and Ruston James set up the touchdown run. Colby Roach added the two-point conversion and with 7:13 left in the first quarter, Cherokee led 8-0.

Buffalo began their next drive on their 35-yard line after the kickoff went out of bounds. The Bison were unable to move the ball after a run netted them no yards and then two incomplete passes forced a punt back to Cherokee.

Cherokee began in good field position on their own 49-yard line but a short run, run for a loss and an incomplete pass forced the Chiefs to punt the ball.

Buffalo was able to move the ball from their 14-yard line to their 39-yard line before the drive stalled and they punted back to Cherokee.

Cherokee ran four plays before the quarter came to a close with them on 2nd and 6 on the Bison 48-yard line.

Two plays into the second quarter, Cherokee scored after a big pass play from Lyon to Treavor Green, then Lyon scored on a 5-yard run for the touchdown. Damien Lobato added the two-point conversion and Cherokee led 16-0 with 11:20 left in the second.

Buffalo returned the kick-off to their 41-yard line. The Cherokee defense held them to a short run, short pass and incomplete pass and then a punt to the Chiefs 20-yard line that was returned by Lyon to the Bison 40-yard line.

Cherokee started their next drive behind the sticks after an offensive illegal procedure,  but that didn’t stop them, 10 plays later Lobato ran in a 13-yard touchdown. The two-point conversion was no good and Cherokee led 22-0 with 5:21 left in the second.

Buffalo began their next drive in good field position after returning the kickoff to their 41-yard line. They moved the ball all the way down to the Chief’s 32-yard line before throwing an intercepted that was picked off by Lyon.

Cherokee ran out the clock on the second quarter leading 22-0.

The Chiefs began the second half with the ball on their 30-yard line. Cherokee ran the ball three times and on the three run, Lyon broke free for a 65-yard touchdown run. The pass attempt on the two-point conversion was no good and Cherokee led 28-0 with 10:19 left in the third.

Buffalo moved the ball from their 38-yard line all the way down to Cherokee’s 2-yard line before being unable to score or get a first down on fourth and 1 from the 2-yard line, giving the ball back to the Chiefs.

Cherokee started on their 4-yard line and 10 plays later Lyon found Lobato for a 49-yard touchdown pass. Lyon also added the two-point conversion to lead 36-0 with 2:22 left in the quarter.

Buffalo answered back on a four play, 60-yard drive that was ended on a 12-yard touchdown run. The pass attempt on the two-point conversion was no good and Cherokee’s lead was cut to 36-6.

During Cherokee’s next drive, the third quarter came to a close.

Cherokee was forced to punt at the end of their drive.

Buffalo scored another touchdown on their next drive after a 28-yard touchdown run that capped a seven play, 76 yard drive. The two-point conversion was no good. Cherokee led 36-12 with 7:31 left in the game.

Following a seven play drive that took four minutes and 16 seconds, the Chiefs punted the ball back to Buffalo.

The Bison scored the final touchdown of the game with 49 seconds left on a 1 -yard run, the two-point conversion  was no good and the score was 36-18.

Cherokee ran out the clock and won the game 36-18.

• James: five carries for 31 yards and one catch for 6 yards.

• Lathan Golden: one unassisted and one assisted.

• Julius Luster: one unassisted and one assisted.

Cherokee will host Okeene for their first district game at 7 p.m., Oct. 15. 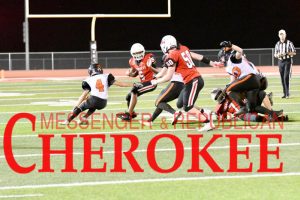 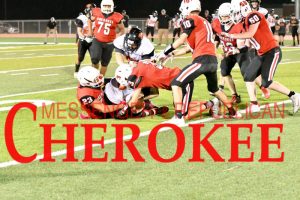 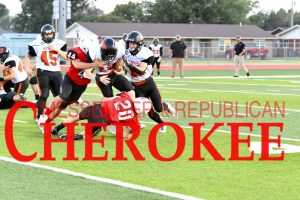