The Timberlake Tiger football team is two wins away from clinching the district title after defeating Wesleyan Christian School 58-6.

The Tigers received the ball to start the ball game. The ball was downed at the Timberlake 48-yard line where the Tigers set up for their first drive.

Timberlake began the drive with a trick play and Merric Judd found Dylan Schlup for a 34-yard pass and catch. JJ Pippin added 5 yards to set up Ethan Jenlink for a 13-yard touchdown run. Jenlink and Judd added the two-point conversion through the air and with 11:05 left in the first quarter, Timberlake led the Mustangs 8-0.

Wesleyan Christian’s first drive started at their 30-yard line and moved all the way to the 44-yard line, with help from a 15-yard face mask penalty, but then the Mustangs were forced to punt to the Tigers.

The punt was moved to the 50-yard line by Judd on a 31-yard return. Judd added a 12-yard run to start the drive, followed by Jenlink’s pass to Schlup for 33 yards. Pippin ran in the final 5 yards on two plays, with the touchdown being from 1-yard out. Jenlink added the two-point conversion to give Timberlake the 16-0 lead with 7:43 left in the first.

The Mustangs put together a drive on their next possession that started at their 36-yard line and ended in the endzone on the other end of the field. Wesleyan Christian ran four plays before a pass was intercepted by Cade Severin, then fumbled, with the Mustangs picking it up. Following the turnovers, Wesleyan Christian started on the Tiger 46-yard line. Six plays later they were in the endzone on an 18-yard touchdown pass. The two-point conversion pass was no good. The Tiger lead was cut to 16-6 with 5:14 left in the first quarter.

The ensuing kick-off was downed on the Timberlake 49-yard line. Carter Sands did the work to score the touchdown when he ran the first play for 45 yards to the Mustang’s 6-yard line. An incidental facemask moved it closer to the goal line and then Sands scored on a 4-yard run. Jenlink connected with Schlup to push the lead to 24-6 with 4:58 left in the quarter.

The Tiger defense forced a three and out and narrowly missed recovering a fumble, but the punt was returned to the Mustang’s 42-yard line by Judd.

Judd started the drive with a 24-yard run and Jenlink finished it was an 18-yard run to score. The two-point conversion was no good and the lead was at 30-6 with 3:04 left in the first quarter.

Again the Timberlake defense held the Mustangs, this time they were unable to gain a first down on a fourth down attempt and gave the ball back to Timberlake on the Tiger 47-yard line.

The drive started with two incomplete passes and then a pass from Jenlink to Judd gave them the first down. Another incomplete pass set up a 2nd and 10 from the Mustang’s 42-yard line where Judd broke free and scored the touchdown. Jenlink and Judd added the two-point conversion to give Timberlake the 38-6 lead with one minute left in the first quarter.

During the Mustang’s drive, the first quarter came to an end with Timberlake leading 38-6.

The first play of the second quarter was a run attempt on fourth down. Itwas short and the ball went back to the Tigers.

They made quick work scoring on a 40-yard pass from Jenlink to Judd. Schlup added the two-point conversion and the lead sat at 40 with 11:43 left in the ball game.

Following the ensuing kick-off, Wesleyan Christian was able to use four minutes and 24 seconds to go 8 yards in seven plays and a delay of game penalty. The fourth down attempt netted negative 1 yard and the ball went back to the Tigers.

Brayden Ross started the drive with a 25 yard run, but a holding call brought it back. He then had two runs that netted 2 yards. Dalton Leierer moved the ball inside the Mustang 10 on a 47-yard run. An incomplete pass was followed by a 6-yard touchdown run by Jenlink. The two-point conversion attempt was no good and the lead was at 52-6 with 5:18 left in the quarter.

Wesleyan Christian threw an interception on their next drive that was intercepted by Sands.

Timberlake scored the final points of the ball game on a five play drive that went for 23 yards. Runs by Ross, Cade Redding and a 15-yard facemask penalty set up Leierer with a 5-yard touchdown run. The pass attempt on the two-point conversion was no good and with 2:14 left in the second quarter, Timberlake led 58-6.

The clock expired during the Mustang’s next drive and the game came to an end.

The Timberlake offense put up 349 yards of offense on 27 plays.

The offense stats were as follows:

• Leierer: two rushes for 52 yards and one touchdown.

• Sands: two rushes for 49 yards and one touchdown.

• Pippin: three carries for 10 yards and one touchdown.

The defense gave up only 100 yards on 42 plays. The Mustangs rushed 18 times for negative 10 yards.

Sands and Severin received credit for the two interceptions.

Up next for the Tigers, they will travel to Copan for a district game. Copan is 1-3 in district play and 1-6 overall and are coming off a victory over Welch 50-26.

The Tigers will look to remain undefeated in district and overall on the road. The final regular season game will also be on the road at Bluejacket. 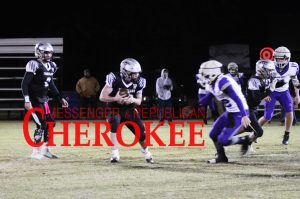 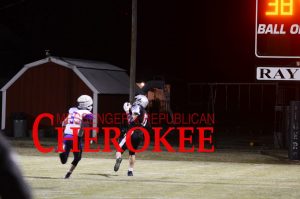 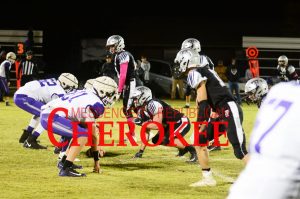 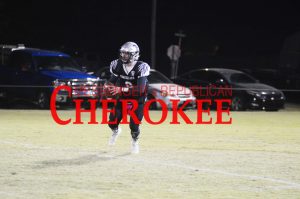 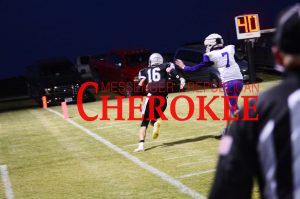 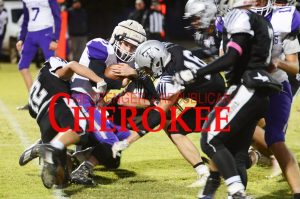 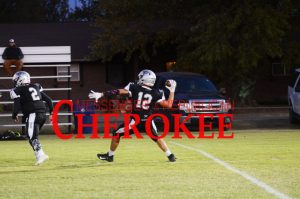 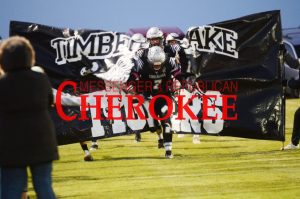 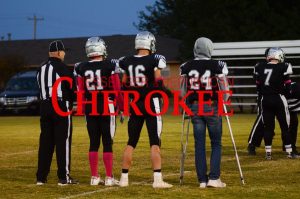