Cherokee traveled to Ringwood to take on the Red Devils on Oct. 30 and came away with the 38-6 victory.

Ringwood began the game with the ball and a defensive stand by the Chiefs after three plays forced the Red Devils to punt the ball.

Cherokee was helped on the first play of the drive following a defensive pass interference that moved the ball to Ringwood’s 41-yard line. Damien Lobato broke free on a 28 yard run that set them up with first and 10 from the Red Devil 13-yard line. Colby Roach and Lobato moved it to the 3-yard line before Matthew Reeves ran in the touchdown. Roach added the two-point conversion to give them the 8-0 lead with 8:29 left in the quarter.

Following the ensuing kick-off, the first play of the drive Ruston James picked off a pass on the Ringwood 12-yard line.

Lobato and James combined to move the ball from the 12-yard line to the 2-yard line where Reeves scored his second touchdown run of the game on a 2-yard run. James added the two-point conversion to increase the lead to 16-0 with 6:48 left in the first quarter.

Ringwood put together a drive that stretched from their 20-yard line to Cherokee’s 20-yard line when the Chief defense stopped the Red Devils on fourth down to get the ball back. Ringwood used six minutes and 34 seconds of the clock, but were unable to score.

Lobato had one run for 11 yards before the quarter came to a close with Cherokee up 16-0.

Four plays into the second quarter Cherokee was forced to punt. The ball was returned to the Ringwood 32-yard line where they began their next drive.

Ringwood’s drive consisted of all passes that stretched 68 yards and ended on a 23-yard touchdown pass. The two-point conversion run attempt was no good and Cherokee’s lead was cut to 10 with 7:38 left in the second quarter.

Cherokee was forced to punt again on their next drive after going three and out.

Ringwood moved the ball down the field to try to cut the lead to a one score game and after going seven plays, they found themselves in a fourth and 2 on Cherokee’s 36, but a loss of yardage saw the drive come to a close.

It took James and the Cherokee offense one play to go 54 yards for the touchdown. James ran the ball for the score. The two-point conversion was no good and the lead was pushed to 22-6 with 2:41 left in the second quarter.

The Chief defense held Ringwood to a three and out, giving the ball back to the Chiefs with 2:05 left.

The drive began on the Red Devil 38-yard line. Lobato opened the drive with two runs for 9 yards total, followed by a run by James for 9 yards to set them up for a first and 10 on the Ringwood 20-yard line with 25 seconds left in the quarter. Following the timeout and holding penalty against Cherokee, James found Kolby Roberts for a 30-yard touchdown catch. The two-point conversion was good and with 18 seconds left in the half, Cherokee led 30-6.

Ringwood ran out the clock on the first quarter.

The third quarter saw each team punt the ball and two turnover on downs before the quarter came to a close.

Cherokee started the fourth quarter with the ball and after a holding call pushed them back, they were forced to punt.

Ringwood started their drive with a pass for no gain, then a 14 yard loss. A defensive face mask penalty temporarily helped the Red Devils but three plays later James had his second interception of the game on the Red Devil 25-yard line.

Lobato and James set up the Chiefs with a first down from the 4-yard line when Reeves punched in the score. Lobato added the two-point conversion to give them the 38-6 lead where it would stay for the rest of the game.

Ringwood punted the ball and followed by a turnover on downs by the Chiefs, the clock ran out, giving Cherokee their third district win and Ringwood’s first loss in district play.

On the defense side of the ball, Cherokee gave up 146 yards on 55 plays. The Red Devils had 23 carries for negative 39 yards. They were 18-32 through the air for 185 yards and one touchdown.

• Kai McHenry: one unassisted and one assisted.

• Brant Failes: two assisted, one sack and one pass deflect. 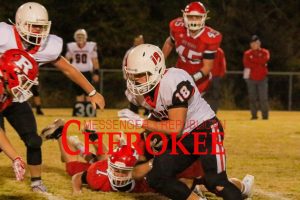 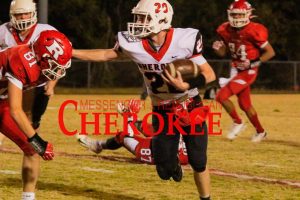 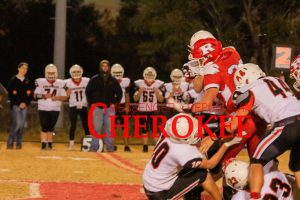 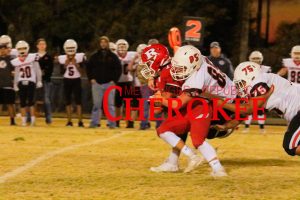 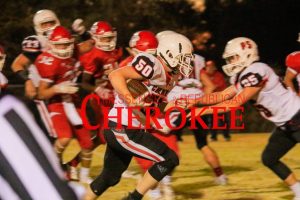