The Cherokee Chiefs remained perfect in district play following a victory over the Pond Creek-Hunter Panthers.

Cherokee outscored their opponents 187-20 in their four district games. They didn’t play Waukomis.

Damein Lobato and Ruston James had all the carries during the first drive with Lobato recording 28 yards and James 52. At one point the Chiefs started behind the chains after a false start, but following an 18-yard run by James, a horse collar penalty tacked on 15 more yards. James ended the drive with a 20-yard run and Lobato added the two-point conversion to give them the 8-0 lead with 2:41 left in the quarter.

On the ensuing kick-off, Cherokee pinned the Panthers deep with them starting on their own 5-yard line.  A loss of 1 yard was followed by a 96-yard touchdown pass by Pond Creek-Hunter. The two-point conversion pass was good and the game was tied at 8 with 1:42 left in the first.

On the kick-off Damien Ramirez was able to return it to the Cherokee 40-yard line and Lobato did the rest on the first drive when he broke free for a 60-yard run. Matthew Reeves added the two-point conversion and with 1:23 left in the first quarter, Cherokee regained the lead by a score of 16-8.

The first quarter came to a close during the Panthers’ next drive. Following two complete passes, two incomplete passes and a penalty, the drive stalled and Pond Creek-Hunter punted the ball.

The Chiefs remained on the ground and were able to move the ball 22 yards before two incomplete passes forced a punt back to the Panthers.

Pond Creek-Hunter picked up a first down but following no yards gained for the next three plays, they punted it back to Cherokee.

James opened the possession with a 16-yard run and Lobato followed with a 69-yard touchdown run. James added the two-point conversion and the lead was at 24-8 with 5:06 left in the quarter.

The Chief defense held on a fourth down attempt on their own 10-yard line and the incomplete pass gave the ball back to Cherokee.

The Chiefs marched down the field with runs by James, Lobato and Reeves. They tacked on another touchdown with 32 seconds left in the second quarter when Ramirez hit James for the 20-yard touchdown. The point after was good and Cherokee led 31-8.

The clock ran out on the Panther drive and Cherokee led at halftime.

Cherokee started the second half with the ball and James was able to run from their own 43-yard line all the way down to the 6-yard line on three carries. Reeves found an opening and scored on the 6-yard run to extend the lead. Lobato added the two-point conversion to push the lead to 39-8 with 10:12 left in the quarter.

Pond Creek-Hunter had an answer with a eight play drive that stretched 74 yards and took five minutes and 48 seconds. The touchdown came on the ground from 54 yards out. The two-point conversion was no good and that cut the lead to 39-14 with 4:30 left in the third quarter.

A three and out by Cherokee forced a punt and then the third quarter ended during the Panthers’ drive.

The second play in the fourth quarter for Pond Creek-Hunter ended in them not gaining enough yardage for a first down and gave the ball to Cherokee.

The ball was carried by multiple Chiefs on their next drive with Ramirez, Reeves, Colby Roach, Kai McHenry and Colby Roach all getting carries. McHenry scored on the 22-yard run and Roach added the two-point conversion, pushing the lead to 47-14 with 7:45 left in the quarter.

The Panthers’ next drive ended with a fumble recovered by Aiden Sanborn.

Cherokee got the ball with 3:47 left in the game and used all but one second on the clock. Roach, Reeves, McHenry, Jackson and Lathan Golden all carried the ball with Golden’s carry for 13 yards and the touchdown. The point after was no good and the final score was 53-14.

Cherokee racked up 473 yards of offense on 43 plays.

• Ramirez: 1-1 passing for 20 yards and one touchdown and one kick return for 9 yards.

• Reeves: five carries for 35 yards and one touchdown and one kick return for 13 yards.

• McHenry: six carries for 25 yards and one touchdown.

• Golden: one carry for 13 yards and one touchdown.

The defensive stats were as follows:

• Gabe Wyatt: one unassisted, three assisted and one pass deflect.

• Kolby Roberts: one unassisted, two assisted and one pass deflect.

• Ramirez: two unassisted and one assisted.

• Char Smith: one unassisted, three assisted, one sack and one forced fumble.

Cherokee will have a bye for their week one playoff round and are set to play the winner of Kremlin-Hillsdale and Balko/Forgan. 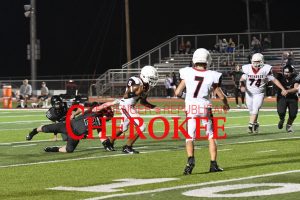 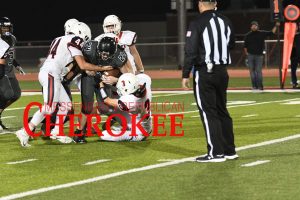 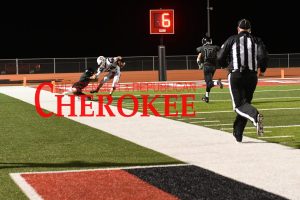