The Cherokee Chief football team fell in the second round of playoffs to Balko/Forgan 24-20.

The Bison began the game with the ball and took almost half of the first quarter with their drive. They stretched 75 yards on 12 plays and scored on a 1-yard touchdown run. The two-point conversion was added and with 6:35 left in the first quarter, Balko/Forgan led 8-0.

Cherokee had the answer, moving the ball from their 36-yard line all the way to the endzone. Ruston James, Damien Lobato and Matthew Reeves were the three with credit for the carries. Lobato capped the drive with a 4-yard touchdown run. The two-point conversion attempt was no good and with 3:19 left, the Chiefs trailed by two points.

Cherokee’s defense stepped up and only gave up 10 yards on the Bison’s next drive and a run for a loss on fourth down gave the ball back to the Chiefs.

Lobato had time to make two runs before the first quarter came to a close. One more run by Lobato set up a fourth and 5 yards for Cherokee and an incomplete pass ended the drive on Balko/Forgan’s 37-yard line.

The Bison began to move the ball and got all the way down to Cherokee’s 19-yard line and on fourth and 2 they threw an incomplete pass to give the ball back to Cherokee.

The first half came to a close on the ensuing drive by the Bison.

Cherokee began the second half with the ball and were able to move it all the way down to the Bison’s 21-yard line but a fumble recovered by Balko/Forgan ended the drive.

The Chief defense had a stand and forced a loss of yardage and a punt on Balko/Forgan’s next drive.

James, Lobato and Reeves took turns carrying the ball and James got the final carry from the 7-yard line and scored. The two-point run attempt was no good and Cherokee led 20-8 with 4:41 left in the quarter.

Balko/Forgan used the remainder of the third quarter before ending the quarter on Cherokee’s 14-yard line as the quarter expired.

An offensive false start pushed them back, but on the next play, the Bison scored on a 20-yard touchdown pass. The two-point conversion pass attempt was good and the Cherokee lead was cut to four with 11:00 left in the quarter.

Cherokee had a three and out and punted the ball back to the Bison.

Balko/Forgan marched down the field, scoring on a 40-yard touchdown pass. The two-point conversion was good and the Bison led 24-20.

Cherokee was unable to pick up a first down on the Bison 38-yard line and the ball went back to the Bison with 1:28 left in the fourth quarter. Balko/Forgan were able to run the clock out on the ball game and advance to the next round.

Cherokee ran 42 plays for 270 yards with all of the yardage coming on the ground.

• James: 15 carries for 85 yards and two touchdowns and four kick returns for 52 yards.

The Cherokee defensive stats are as follows:

• Lobato: 12 unassisted, seven assisted, one sack and one fumble recovery.

• Colby Roach: one unassisted and one assisted. 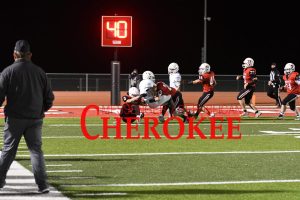 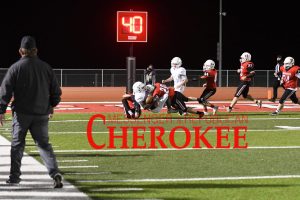