Parts of the tournament were held at Kremlin-Hillsdale and the other part at Timberlake.

Timberlake opened up play in Helena on Friday, March 26, against Geary.

Timberlake was the designated home team following the coin toss and senior Cameron Brewer took the mound to start the game.

The opening batter was hit by a pitch and then Brewer recorded three straight outs with a pop out and two strikeouts.

In the bottom of the inning, Merric Judd opened things up with a double and then Jacob Diller followed it with another double. Ethan Jenlink was thrown out at first, but recorded the RBI when Judd was able to score. Mason Parkhurst came in to courtesy run for Timberlake’s catcher Diller and was later thrown out at home. Brewer reached base on a walk, but a strikeout ended the inning with one left on base and Timberlake leading 1-0.

In the top of the second inning, Brewer went three up and three down with an out at first followed by two strikeouts.

Chase Pierce opened the bottom of the inning with a walk, as well as Jadon Adkisson. Both were able to score in the inning with Pierce scoring on a called balk against the pitcher. Adkisson scored on a single by Greysan Ioerger. Ioerger was later thrown out at home to  record the final out of the inning. Timberlake led 3-0 going into the third inning.

Geary was able to score one run in the third inning when their batter was walked and later stole home. Brewer struck out two batters in the inning.

Timberlake increased their lead by three runs in the bottom of the third inning.

Brewer again went three up and three down with an out at one and two strikeouts.

The bottom of the inning saw Timberlake go through five batters with two being left on base and no runs scored.

Cade Severin came in as relief for Brewer to start the fifth inning. Brewer struck out eight runners and gave up one run.

Severin walked the first batter he faced, but two pop outs followed and on the second, the runner failed to tag up and was thrown out, ending the inning.

Sands started the inning off with a walk and Ioerger hit a single scoring Sands. Judd followed the single with a walk to put two runners on base. Jenlink hit a single and scored Ioerger. The game came to a close when Brewer was thrown out at first, but scored Judd to record the run rule victory in the fifth inning. The final score was 9-1.

In game two, Cherokee faced Medford. Cherokee was the designated home team after the coin toss and Noah Leslie took the mound for the Chiefs.

Leslie opened up the game with two strikeouts and then a grounder that recorded the out at first.

Houston Bockelman was the first up to bat and was hit by a pitch to get on base. Xander Jackson followed suit. Following an infield fly by Ruston James, Leslie and Drake Williams both were walked. Bockelman scored in the inning to give them the 1-0 lead going into the second inning.

The Cardinals opened the inning with a single, followed by two walks before Leslie recorded the strikeout. A pitcher change brought Zachery Hellar in. Two runs scored during the inning to give Medford the 2-1 lead going into the bottom of the inning.

Brant Failes was first up in the bottom of the inning and was walked. Kannin Koehn  and Jayten Davis followed the walk up with free bases after getting hit by pitches. Jackson recorded a RBI when he was walked, scoring Failes. Leslie recorded the other with a walk that scored Koehn. Cherokee retook the lead 3-2 after the second inning.

Medford cycled through 10 batters during the top of the inning with four of them scoring.

Failes was walked again to start the bottom of the inning. Koehn also kept in line when he was hit by a pitch. Bockelman hit a double that scored Failes to cut the lead to 4-6. A strikeout ended the inning.

Medford added four runs in the top of the inning to push the lead to 4-10.

With the time almost out on the game, Cherokee had the bottom of the inning to try to make a run to regain the lead. Leslie walked to get one runner on base and then Williams hit a single to get the second runner on base. Failes scored both runners on a single to cut the lead to four, but then a strikeout and out at first ended the game with a score of 6-10.

Timberlake faced Medford in the third game with a chance to advance to the championship game on March 27.

Judd opened the game on the mound. The first four batters were walked with one scoring. Jenlink came in on the fifth batter and recorded three straight outs.

Judd and Diller both got on base with a single and walk respectively and then Jenlink hit a double, scoring both runners to take the 2-1 lead in the first inning.

The rest of the game was back and forth with no runs being scored in the contest. The final after seven innings was 2-1 with Timberlake winning to advance to the championship game.

Jenlink recorded 15 strikeouts in the game.

On day two of the tournament, Cherokee faced three opponents. The first was Waynoka and the Chiefs won 12-9. The second was Geary and Cherokee won 14-11 and the third was Lomega and the Raiders stole the 8-9 victory.

Timberlake advanced to face Kremlin-Hillsdale in the championship game.

The Broncs scored three runs in the top of the first inning and Judd cut the lead in the bottom with the lone run for the Tigers.

Neither team scored in the second inning.

Kremlin-Hillsdale added one in the fourth and Timberlake scored Pierce and Adkisson to cut the lead to 3-4.

The Broncs scored four runs to push their lead to 3-8 in the fifth.

Timberlake fought back and scored Sands, Judd, Diller and Jenlink to trail 7-8 going into the seventh and final inning.

Kremlin-Hillsdale was able to get runners on base and scored three before the bases became loaded and a grand slam increased their lead. The inning came to a close with the Broncs winning the championship 16-7. 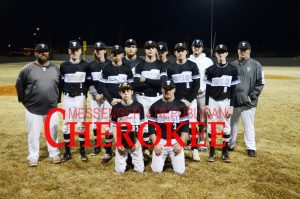 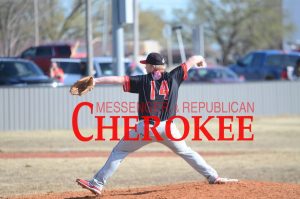 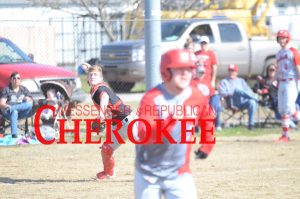 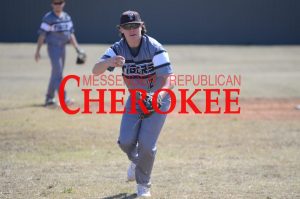 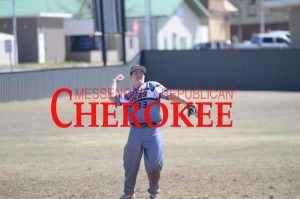 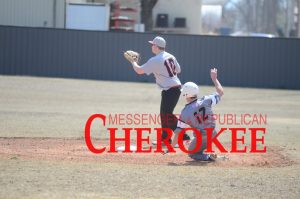 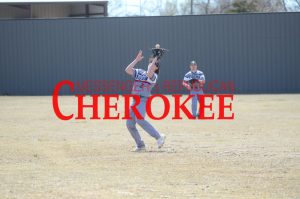