The theme of this year’s convention was “Stay Connected, Stay Red” according to Brittani Phillips, State FCCLA Adviser at the Oklahoma Department of Career and Technology Education, Stillwater.  Cherokee FCCLA had 24 members attend the 2021 State Convention.

Convention activities began with the opening general session at 9:00 a.m. where scholarship winners were announced and honorary members were recognized. Madison Wheeler and Bridget Wilhite, from Cherokee, each received an Oklahoma FCCLA Alumni and Associates Scholarship worth $1,500.  Oklahoma FCCLA president, Kenzlee Camp, Broken Bow High School, presided over the convention.

Members and advisers had the opportunity to hear keynote speaker, Kyle Scheele.  13 workshop interest sessions were offered, ranging in topic from leadership development to the power of positivity. 2021-2022 State Executive Council members were elected and installed.  Participants also had the opportunity to view exhibits and network with businesses from around the state.

This convention was the first hybrid State Convention Oklahoma FCCLA ever hosted, with over 200 chapters live streaming into the sessions. Many chapters had viewing parties at their schools or held events off campus in order to make the day memorable for members.

FCCLA is a career and technology student organization sponsored by the Oklahoma Department of Career and Technology Education and is an integral part of Family and Consumer Sciences Education programs in comprehensive high schools and area technology centers. 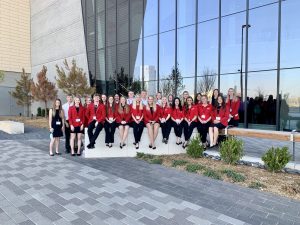