The Cherokee Lady Chief and Timberlake Lady Tiger softball teams faced off in a county rivalry game in Jet on Monday, Aug. 23.

This was the second time this season that the two teams faced off against each other with Cherokee taking the first victory 8-4 at Kellet Park in Enid.

The Lady Chiefs were up to bat first with them being the visiting team and Timberlake’s Rylee Hutchison set the first two batters down with strikeouts and the third batter was thrown out at first base.

The bottom of the inning was started off with Kilynn Gaff hitting a triple and Kinlie Judd followed up with a single that scored Gaff. Cherokee’s Madysen Ryel sat down the next three batters with a pop out, strike out and throw out at first.

Chesney Berry opened the top of the second inning with a walk and later scored on a wild pitch. The next batter was out at first and then Alaina Frazier hit a triple and later scored on a wild pitch. Sophie Cantellay made it on base after being hit by a pitch. A strike out brought the second out of the inning, but then a walk by Harley Smart and Lexi Williams being hit by a pitch, but then a strikeout ended the top of the inning with the bases loaded.

The bottom of the second inning for Timberlake was started by McKenna Mach getting walked and then Karleigh Decker followed it with a single to get two runners on base. Ryel struck out the next two batters and then Gaff hit an in-the-park homerun that scored herself, Mach and Decker. Judd then hit a single to make it to first base and then another in-the-park homerun scored two. Ryel ended the inning recording her fourth strikeout of the game. Timberlake took the 6-2 lead going into the third inning.

The Lady Tigers held the Lady Chiefs to three up and three down in the top of the third.

Gabriella Herrera opened the fourth inning with a walk but after a pop up and out, didn’t make it back to base and was called out on a double play. Olivia Cortright was hit by a pitch and then later scored on a single by Mae Nevels. The final out of the inning came at first base.

The Cherokee defense held the Timberlake offense to three up and three down.

At the end of the fourth inning the score was Timberlake 6, Cherokee 3.

Frazier started out with a walk, but then Ryel hit an in-the-park homerun to score both of them. Hutchison then sat the next three batters down with three straight strikeouts giving her eight on the day.

Cherokee cut into the lead and trailed 5-6 going into the bottom of the inning.

Timberlake started off with a single and then a walk. The third batter was struck out but then the next three batters all hit singles with the Mach and Decker recording RBIs. Decker was called out on an interference, but then Natalee Green was able to score. A dropped third strike advanced a runner to first and then a walk. The final out of the inning was a line drive caught.

The lead at the end of the fifth was 11-5 for Timberlake.

Cherokee opened up with a strikeout and then two walks and a single. The Lady Chiefs had a runner thrown out at third and then a pop fly ended the inning.

In the bottom of the sixth, the Lady Chief recorded two quick outs with a pop out and strike out. Powell then recorded a single, Mach a walk and Decker a single before Green scored the needed runs to get the run rule with a 13-5 victory for the Lady Tigers.

Timberlake travels to Waynoka on Aug. 30 and Kremlin-Hillsdale on Aug. 31 before returning home to play Drummond at 6 p.m., Sept. 2. 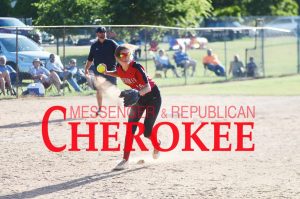 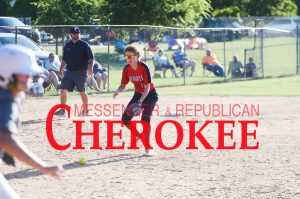 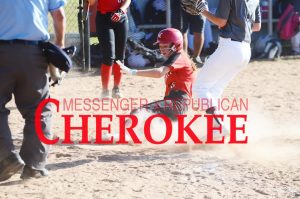 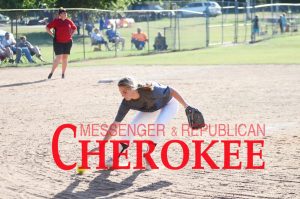 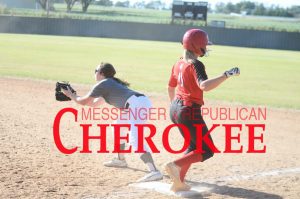