The Cherokee Chief football team moved to 1-1 on the season after defeating Sharon-Mutual 36-6 on the road.

The Trojans began the game with the ball and moved from their 35-yard-line to the Cherokee 12-yard line before Lake Lyon intercepted the ball for a touchback.

Cherokee began on their 20-yard line and Lyon opened the drive with a 40-yard rush and Damien Ramirez finished with a 40-yard run of his own that scored the touchdown. Lyon added the two-point conversion and Cherokee led 8-0 with 6:43 in the first.

The Chief defense held the Trojan offense and forced a punt.

The Cherokee offense took three plays for Lyon to find Kolby Roberts for the 43-yard touchdown pass and catch. Lyon added the two-point conversion and Cherokee led 16-0 with 2:37 in the first.

A three and out by the Trojans gave the ball back to the Chiefs and the quarter came to a close before Cherokee could score.

The first play of the second quarter saw Lyon score the touchdown from 32-yards out. The pass attempt on the two-point conversion was no good and Cherokee increased their lead to 22-0 with 11:53 to go in the second.

Another punt by the Sharon-Mutual offense gave the ball back to the Chiefs.

The ensuing drive stretched 61 yards and took nine plays with Kai McHenry scoring the 7-yard touchdown run. He also added the two-point conversion to extend the lead to 30-0.

Neither team scored in the remaining time left in the second quarter.

Cherokee started the third quarter with the ball, but failed to pick up a first down on a later fourth down,, giving the ball back to the Trojans.

Sharon-Mutual later fumbled the ball with Cherokee recovering. The Chiefs capitalized on the turnover and Lathan Golden later scored on a 5-yard touchdown run. The two-point conversion was no good and Cherokee led 36-0 with 5:04 left in the quarter.

Sharon-Mutual answered the touchdown back with a 6-yard touchdown pass and catch. The two-point conversion was no good and the lead was cut to 36-6, where it would remain for the rest of the game.

The two teams traded possessions in the remaining third and fourth quarter before the final buzzer sounded, with Cherokee winning 36-6.

• Ramirez: one carry for 40 yards and one touchdown.

The Cherokee defense held the Trojans to 122 yards of offense on 48 plays. Sharon-Mutual had 39 carries for 116 yards and was 2-9 passing for 6 yards with one touchdown and one interception. The defense also recovered one fumble.

• Lyon: one unassisted, six assisted and one interception.

• Gabe Wyatt: one unassisted and one assisted.

• Ty Hellar: one assisted and one sack.

The Chiefs will host their first home game of the season against Pioneer at 7 p.m., Friday, Sept. 10. 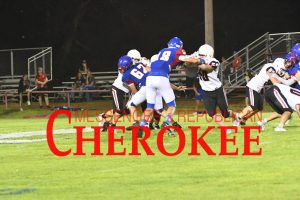 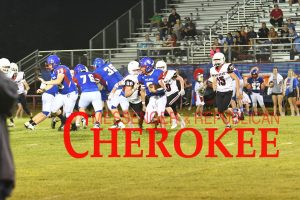 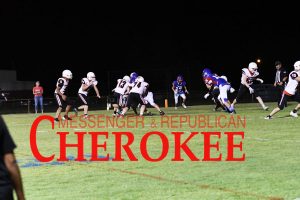 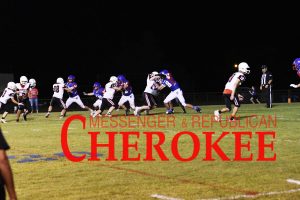 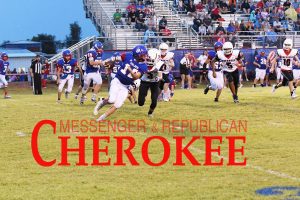 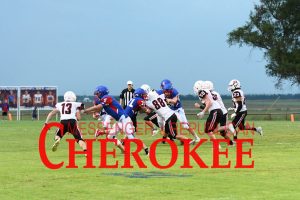