The Cherokee Lady Chief softball team traversed to Okeene for a three way series with Okeene/Aline-Cleo and Cimarron Aug. 31.

Second game saw the Lady Chiefs square off with the Lady Blazers of Cimarron.

Cherokee was the designated away team in the contest and had the first opportunity to put runs on the scoreboard.

After back-to-back outs to open the top of the first inning, Madysen Ryel used a hard hit ball and a Cimarron error to make it to first safely.

One at bat later freshman Chesney Berry delivered a RBI double to drive in Ryel for the game’s first run.

A strikeout ended the top of the first with Berry left on second base.

Bottom of the first saw a flawless performance by Ryel in the circle as retired three Lady Blazer hitters in succession as the game was sent to the second inning with Cherokee on top 1-0.

Top of the second saw the Lady Chiefs go three up and three down and the game went to the bottom of the second with Cherokee on top 1-0.

Bottom of the second saw bats come to life for Cimarron as they used a walk and five hits to plate five runs to take a 1-5 advantage into the third inning.

The score would remain unchanged through the third inning. In the top of the fourth inning Berry drew a walk to get on base for the Lady Chiefs. Following a groundout Harmony Cortright was able to draw a walk of her own. Ball four on Cortright’s at bat sailed passed the catcher and allowed Berry to score on the exchange.

A strikeout then left Cherokee with one runner on base and two outs before Harley Smart drew a walk to give the Lady Chiefs two runners on base.

Unfortunately, a strikeout ended the top of the fourth inning with two Lady Chiefs left stranded.

Midway through the bottom of the fourth inning the game reached the set time limit as the Lady Chiefs came up short 5-2.

In their second game of the day the Lady Chiefs were facing the home team Okeene/Aline-Cleo.

Top of the first saw Cherokee go three up and three down and the game moved to the bottom of the first.

Bottom of the first opened with Keeley Hussey blasting a pitch to left field. Hussey turned on the jets and was able to race around the base paths for an inside-the-park home run.

Hussey’s run was the first of four runs scored in the bottom of the first inning as Madison Munden, Hannah Nease and Katelyn Penner all crossed home plate in the inning.

After a groundout to open the top of the second, Elyce Roglin singled down the third base line.

A single by Berry gave Cherokee two runners on base with one out. The Lady Chiefs were then snake bit as a hitter hit into a ground out, Roglin ended up in a run down between third base and home and she was eventually tagged out to end the top of the second.

Bottom of the second began with a walk before Hussey singled to give OAC two runners on base with no outs. Munden then connected for a double but a runner was out at home on the play.

Nease then found her pitch and cleared the bases with a 3-Run inside-the-park home run that also scored Hussey and Munden.

Following a strikeout Alexus Naugle made it on base after drawing a walk. Sydney Biggs was then hit by a pitch to put two runners on base with two outs before a strikeout ended the second inning.

Top of the third saw Cortright single to lead off the inning and she was followed by Sarita Kephart who delivered a single of her own.

After a strikeout, Lexi Williams was at the plate for the Lady Chiefs. During her at bat, Cortright was able to score on a passed pitch to put Cherokee on the board.

Williams then grounded out and Kephart was called out trying to score on the play to end the top of the third with Cherokee cutting into the lead at 7-1.

After back-to-back outs to begin the bottom of the third, Hussey made it on base with a single. However, her time on the base paths was short as great defense by the Lady Chiefs saw Hussey thrown out trying to steal second to end the inning.

Munden connected for a triple to lead off the bottom the inning and she was driven in one at bat later by Nease with a RBI single.

Penner was then driven in by Sydney Biggs who delivered a RBI single after Penner made it base with a walk. Jentry Biggs then singled but Sydney was out at second on the hit. Following a walk by Tiffany Lorenz the inning ended with a popout. Through four innings of play Cherokee trailed 10-1.

Top of the fifth opened on a high note at Berry lead off the inning with a triple. Garbriella Herrera then drew a walk and Cherokee had two runners on base with no outs.

H. Cortright then grounded out but it was enough to score Berry from third and Cherokee cut into the lead.

Following a strikeout, Mae Nevels delivered a RBI single to drive in Herrera. A double by Williams put two Cherokee runners on base with two outs.

Ryel then blasted a 2-RBI double to drive in Nevels and Williams before the ball game ended with a strikeout. Cherokee was able to mount a rally but it wasn’t enough as they fell 10-5. 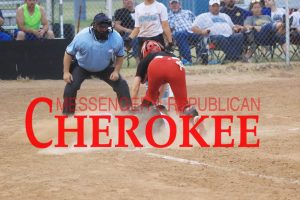 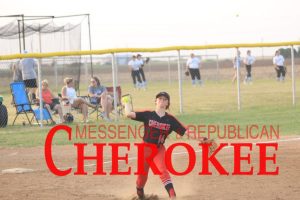 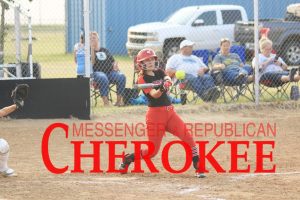 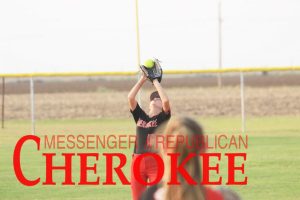 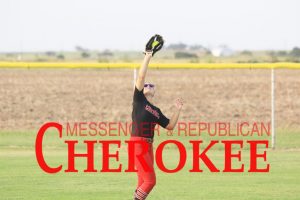 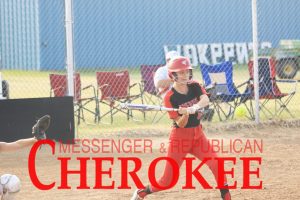 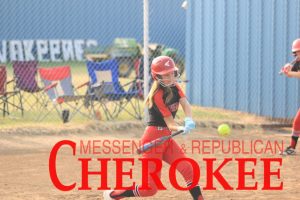 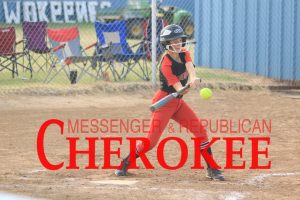