Despite facing multiple lightning delays, the Timberlake Tigers were able to secure their second victory of the season, defeating Ringwood 38-0.

The Red Devils came out with an onside kick catching the Tigers off guard and they recovered the ball.

Timberlake’s defense made up for the special team error and only allowed Ringwood to move the ball 11 yards in six plays, forcing a turnover on downs.

The Tigers took over, but three plays later, after going 5 yards, they fumbled the ball with Ringwood recovering.

Again, the Timberlake defense held the Red Devils to only 7 yards of offense and forced a turnover on downs to get the ball back on the Timberlake 35-yard line with 8:13 left in the first quarter.

Timberlake moved down the field in 12 plays that took four minutes and 16 seconds for Ethan Jenlink to score the 3-yard touchdown. The two-point conversion attempt was no good and Timberlake led 6-0 with 3:57 left in the first.

Ringwood fumbled the ball on their next drive and it was recovered by Cade Severin on the Red Devil 40-yard-line.

Timberlake opened the next drive with a fumble recovered by the Tigers, but they lost 24 yards. Carter Sands broke free and scored on a 59-yard touchdown run. Jenlink and Judd added the two-point conversion through the air and Timberlake led 14-0 with 1:58 left in the first.

The first quarter came to a close during Ringwood’s next drive.

Three plays later in the second quarter, the Red Devils punted the ball away.

The Timberlake drive started on the Ringwood 37-yard line. A pass from Jenlink to Judd started the drive and moved the ball 18 yards and it was followed with a pass to Pippin for another 12. Three plays later Jenlink connected with Judd for the 8-yard touchdown pass. Jenlink and Avery Wallace connected on the two-point conversion to push the lead to 22-0.

The Tiger special teams were able to recover a kick to the 20-yard line before the Red Devils. The kick was recovered by Judd.

Two plays later Pippin scored the 12-yard touchdown on the ground. Wallace connected with Severin for the two-point conversion pass and Timberlake led 30-0 with 7:55 left in the game.

On the ensuing drive by Ringwood, Judd intercepted the ball to set up first and ten from the Ringwood 48-yard line.

The Tigers drive stretched eight plays before Jenlink ran in the 13-yard touchdown to push the lead to 38-0 following the two-point conversion pass from Jenlink to Wallace.

Both teams lost one fumble and Ringwood threw one interception.

• Sands: two carries for 67 yards and one touchdown and one catch for 17 yards.

• Pippin: eight carries for 30 yards and one touchdown and three catches for 43 yards.

The Tigers will travel to Waukomis for a 7 p.m. kickoff this Friday, Sept. 10. 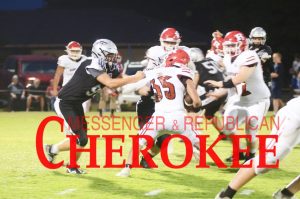 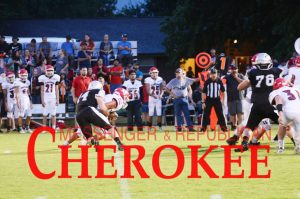 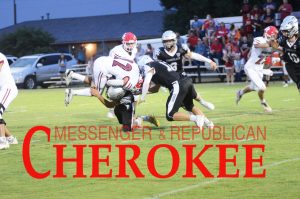 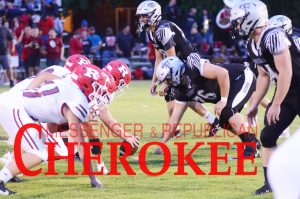